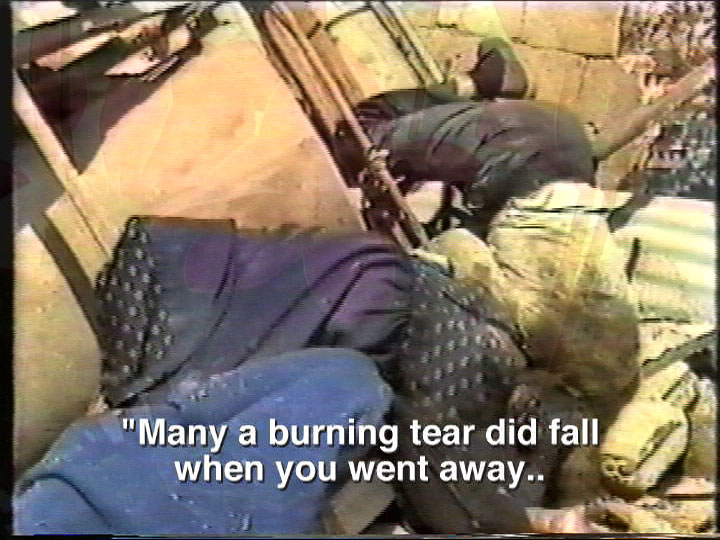 Vtape Video Play is a personal invitation to a series that features leading artists from different generations and cultural perspectives, who are among the most important artists working in video and digital imagery today. All of the titles represented have been closed-captioned for accessibility.

Vtape invites you to preview 8 programs in bespoke screening rooms addressing both a creative and critical practice on some of the most pressing conversations of our time.

All programs represented have been closed-captioned for accessibility. To purchase a program Vtape is offering educational institutions at a special discount of 20%. For more information please contact distribution@vtape.org

These five video works turn our view to a history of displacement, colonization and the deepening humanitarian crisis.

A more ambient work of many things, including orchards blooming and plants growing, super-imposed over raw footage from post massacre filmings of the 1982 massacre at Sabra and Shatilla refugee camps in Lebanon. Cloud footage, Hubbell space imagery, the visible body crosscuts and abstract shots of slow motion water, add to this reflection of the past, its present context and forbearance.

Part 3 of the Palestine Trilogy: documentations in history, land & hope. A Hot Sandfilled Wind expresses the despair and hope of contemporary politics in Israel/Palestine. This video, based on a poem by Nadia Habib, visually acknowledges, in the context of Israel’s occupation of Palestinian land, that Israelis and Palestinians live and work, and suffer loss, side by side; and that mutual recognition is the only basis for hope.

Shot in Al-Kabri, a destroyed Palestinian village where only a cemetery remains beneath an Israeli park that memorializes the destruction of a series of villages in the  North of Palestine. The disorienting experience of being at the site inspired the  fragmented editing. The title is taken from a line by Karl Marx in “The 18th Brumaire of Louis Bonaparte.”

Jehad Aliweiwi is a Palestinian Canadian who lives in Toronto but regularly returns to visit his family in Hebron. Rendered on two screens, Jehad in Motion is a double portrait both of the man and of the two cities he calls home. In Hebron, Jehad takes us to the old market where Jewish settlers have colonized the upper stories forcing Palestinians to build a horizontal fence to protect themselves. In Toronto, we walk around Thorncliffe Park where he works providing services in one of the city’s key neighbourhoods for newly arrived immigrants.

Bodies in Motion emerged from my experience of the Palestinian Intifada (2015-2016). The work consists of hundreds of images of individual protesters, digitally converted into silhouettes on a unifying white background. The work sets in motion the still images through animated sequences of stone slinging and its distinct visual language. Every few seconds, a black and white photograph punctuates the screen, connecting the real with the symbolic, the past with the present and the local with the universal.

In forgive me for speaking in my own tongue (4 minutes and 12 seconds before entering melancholy), the artist is engaged in the act of meditating on her breathing; focusing on each inhale and exhale.

This experimental animation depicts how a late night radio dedication leads to nocturnal reverie of an unrequited love.

3. Womanism is a Form of Feminism Focused Especially on the Conditions and Concerns of Black Women, Madelyne Beckles, 2016, 03:48, EN CC

I looked at my work through the gaze of endarkened perspectives and found them in Repair, a film about my grandfather’s house in Georgetown and the rainforest in Guyana.

5. Coming To Voice, Anthony A. Browne and Glace W. Lawrence, 1999, 51:00, EN CC
Coming To Voice is a dynamic, visually stylistic documentary exploring the emergence of Black film and video makers in Canada.

INCLINATIONS began as a moment of ‘crip’ play. Alice Sheppard and Danielle Peers find themselves literally somersaulting in their wheelchairs on a 90-foot ramp on “social street”: the main entrance of the Kinesiology building at the University of Alberta.

Red Buffalo Skydive is a 3-minute video featuring a repeating 6-second clip of an animated running buffalo combined with dialogue of the artist repeating a story told to her by a paraplegic man who picked her up hitchhiking.

As Deaf people we are constantly asked to explain, and through having to explain ourselves, to convince ourselves and others of our important role in society. I want to present and capture the beauty of sign language and show how powerful a tool for communication it is.

“Body Wrap” emerged through my desire to live up to my hypervisibility. As a queer, visibly disabled, person of colour, the choice to be invisible was never an option. Being invisible was always an unknowable elsewhere. And in performance art, which has a history of using the body as an art-tool, my body always seemed to include an unintentional underlay of provocation.

Paralleling the experience of Blindness with Mental Illness, Cuthand deftly elucidates that any of us could lose any of our abilities at any time.

Why are you asking about sexual identities and visible minorities if its not required?

I turned six in 1970. The beginning of a new era. I was just starting to understand the hugeness of gender. Everything seemed to be about that. It felt really heavy.

The protagonist begins the process of undoing / rewriting a self-image that doesn’t fit.

Labeeb is an intimate portrait of Sumaya, a Somali trans-woman. One video documents aspects of her daily life, while the other portrays Sumaya performing a Somali ritual usually reserved for women.

The expression of a first-generation Canadian, who passes for black in her home country, finds herself passing for white in Brazil.

“SuperNova is a game show parody that mimics the tropes of American Idol reality tv shows and consists of seven characters in which Rah performs.

We are empowered, changed and healed by stories

The artist ponders the possibilities of reconciliation. Upon the first round of rebuilding, it works perfectly and then another try makes it more difficult.

Personifying Mother Earth, she walks through her domain. She observes her environment and what has happened to it. She weeps.

Dancing with Naango is a short film about my daughter’s journey as a Jingle Dress dancer. She takes the viewer through her journey of regaining her culture as she works on relearning her traditions.

The “Gift” is an exploration of betrayal and deception wrapped in a cozy blanket infested with the small pox disease. 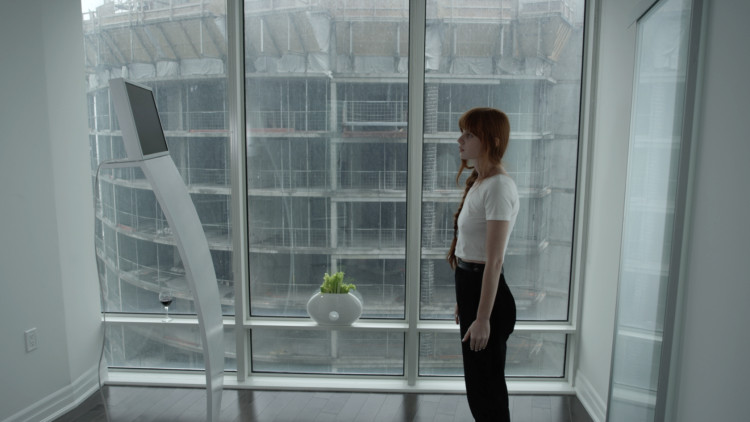 We are pleased to announce that Aden Solway is the recipient of the 2022 The Researcher Is Present position. This will allow full support for his research project through the videos and printed material at Vtape throughout the first months of 2022, culminating in a project – as yet unspecified – to be presented later in 2022. He describes his interest in working with Vtape as follows:

“Media art, traversing many different genres and contexts, has drawn increasing interest within the field of curation, both as an subject of inquiry and as an emissary of change. While scholars have provided accounts on how the moving image came to occupy the museum, the purpose of my research is twofold: to analyze how the ascent of moving-image practices influenced various disciplines within the museum; and to explore key works of moving-image art which responded both to the museum as a site (site-responsive) and to their own history as a medium (self-critical). This is a subject that warrants greater address as it offers a new perspective on how the moving-image operates within, against and in service to the museum.

“There is, I posit, an enduring romance between history, ideology and media playing out in the domain of the museum. Such a romance is on congenial terms with the discipline of curation, which gives presence to these interactions at a given historical moment.

“Thus the proposed research project will analyze the exhibition of film, video and new media within the museum – and auxiliary sites – in understanding its influence on curation, museology and the broader cultural field. Emphasis will be placed on contemporary artists (Thirza Cutland, Geoffrey Pugen, Coco Fusco, Rehab Nazzal and others) working within the language of media to develop work that is: site-responsive, taking cue from the spatial and epistemic context of the museum; and self–critical, engaging in forms of critique that are conversant with, and in relation to, its own history as a medium. Guided by theoretical models conceptualized by scholars of film (Michael Renov, Trinh T. Minh-Ha, Erika Balsom), visuality (Gilles Deleuze, Clement Greenberg, Fredric Jameson), comparative media (Shu-Mei Shih, Yuk Hui, Laura Mulvey) and museology (Claire Bishop, Andrew Dewdney, David Joselit), I will engage in a longue durée analysis of the moving-image’s influence in the museum, tracing key exhibitions and singular works that furnished the basis for new modalities of artistic practice.

“Through this research, I will provide textured analysis on the museum’s dispositif. That is, in the Foucauldian sense, the laws, theories of curation, conventions, moral propositions and values that are immanent in the practice of ‘exhibiting media.’ In this, I will consider the transformations that have taken place within the museum and their impact on curation at large. Indeed, the tradition of moving image arts has continued to inspire new visions of art and collaboration, destabilizing traditional models of museology. In witness to these shifts, one must proffer the question: how does the exhibition of film, video and new media within the museum bring new concerns to the work of curation and museology? My research will attend to this question and position it within broader theoretical discourses.”

Aden Solway is an artist and curator based in Toronto, Ontario. Trained as a historian, they have held positions across three continents, contributing to projects led by The Art Gallery Of Ontario (AGO), Scotiabank Contact Festival, The Whitney Museum of American Art, Princeton University, The Art Institute of Chicago and York University. Over the last decade, they have maintained residency and fellowship positions at Banff Center for Arts and Creativity (Canada), Museum of Contemporary Art (Toronto) and Cornell University (NYC). Presently, they serve as a Harding Distinguished Scholar at the University of Cambridge (UK) studying the collection, exhibition and publication of time-based arts within diverse contexts. 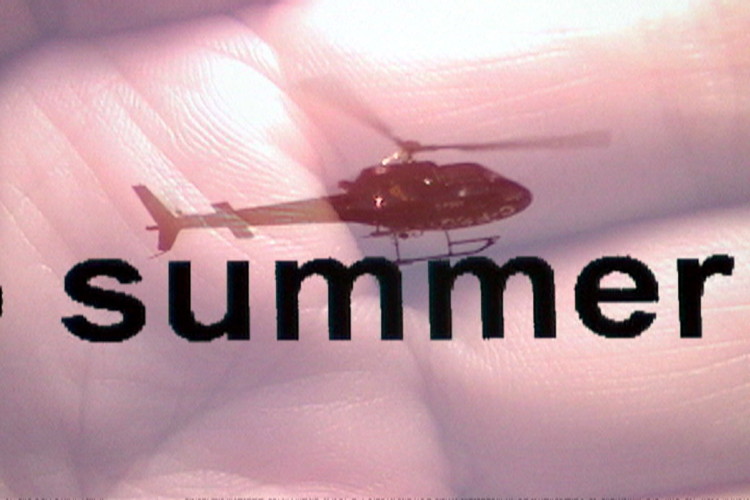 Vtape will be closed for two weeks as we recoup and catch our breath after the past year and a half. Our office will be closed to the public; during this time, Vtape staff will be checking email less frequently than usual.

Vtape engages audiences through a diverse array of video-art-related exhibitions and events featuring challenging works by both emerging and senior artists, in solo exhibitions and curated group screenings. Programs result annually from our renowned Curatorial Incubator program, and we also host occasional curatorial residencies. Exhibitions and events take place on-site in the Bachir/Yerex Presentation Space, shared with our partners in The Commons @ 401, as well as off-site.

Artists’ and curators’ talks that accompany our exhibitions allow audiences to gain personal insight into the works presented and to exchange ideas with artists and curators; annual collaborations with the Images Festival and imagineNATIVE Film + Media Arts Festival bring new and exciting video art and talks to an international audience.

Check listings for dates, times and location details. The Past Events Archive for shows and events you might have missed.