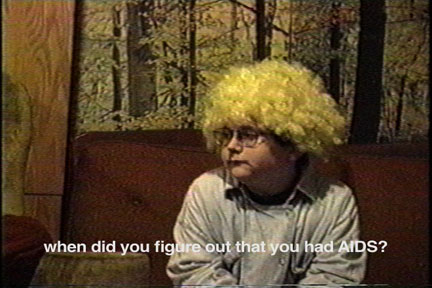 This year The Curatorial Incubator, v.12 – A Portrait of the Artist as a Young Brat asked emerging curators to look at the work of media artists who are not afraid to act up and act out. The results are now “ready for their close-up” (to quote Gloria Swanson as Norma Desmond, an old brat if ever there was one). This year the probing, critical research of our incubatees has again come up against the realpolitik of artists’ energy. The results are challenging and often explosive – sometimes in a quiet way, sometimes in a completely insane way. That’s the beauty of asking young curators to sift through the already-made world of video art and come up with an idea and then take that idea for a walk: sometimes it makes perfect sense; sometimes it’s just a great trip. Either way, the work of the past (sometimes recent; sometimes not) rubs up against the work of the now. Again The Curatorial Incubator proves to be important programming platform, providing a context for exchange and discourse across genres.

We continue this year’s Curatorial Incubator with Adam Barbu’s look at representations of self-doubt that examine misbehaviour as moments of the mundane, the awkward, the unspectacular.

Adam Barbu is a writer and curator currently based in Ottawa. He has produced exhibitions nationally and internationally that explore themes of displacement and cultural memory. Recently, he was the curator in residence at the Parque Cultural de Valparaíso (Valparaíso, Chile). In, Ottawa, Adam works for international contemporary art space La Petite Mort Gallery.

Watch for the third installment of The Curatorial Incubator v.12, In Perpetual Search for the Self curated by Shauna Jean Doherty, opening March 6, 2015.

Still credit: Vincent Chevalier, So… when did you figure out that you had AIDS? (2010).