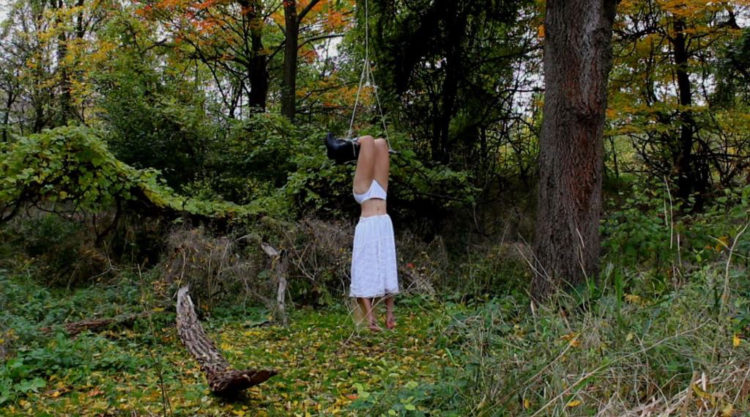 This year, Vtape invited Jennifer Fisher and Jim Drobnick to develop the theme for, and guest-mentor, the Curatorial Incubator. They called for curatorial proposals that reflected on the psychic and cultural shock unleashed by the political crisis in democracy. Respondents were asked to consider video’s affective power to focus attention, engage critique, forge relations, and invent ways of collective feeling that re-imagine aspiration, consolation and freedom.

Four emerging curators and curatorial teams were selected and their programs will be screened on consecutive Saturdays: Almudena Escobar López and Masaki Kondo on December 1; Mel Day and Isabelle and Sophie Lynch on December 8.

The exhibition is accompanied by a publication.

Sbara references Stanley Kubrick’s 1980 film The Shining. A child wanders the grounds and rooms of a creepy mansion, and experiences terrifying visions. Visual quotes from the film are combined with historical and contemporary audio about the Middle East.

This trilogy of videos uses found footage to explore how women are gendered in popular media. Each of the three works focuses on a specific cinematic gesture: screams of horror, moments of ecstasy, and women turning towards the camera.

This video comprises a letter to a mouse that discusses inter-species cohabitation and the political implications of living with others. The footage shows the construction of a Rube Goldberg-like mouse trap amongst images of domestic and public lives.

Handheld footage shot with a Pixel-vision camera shows the filmmaker frantically walking around the Toronto Eaton Centre while pretending to be a smart bomb looking for its target.

Using found footage, animation, and images from a miniature diorama, a cat and a rabbit deliver a message from the future. They answer transcendental questions about death, God and grace, as well as offering advice about what really matters in life.

The film visualizes a nightmare that the artist experiences. Two girls play in the tundra until they lay down to sleep in a tent. One dreams of running through a beautiful landscape until being flown toward a lake by disembodied hands.

The artist struggles over and over again to pronounce خ (transliterated in English as kh), one of the 28 letters of the Arabic alphabet. This reiterative performance opens up the political and social dimension of the letter’s sound.

A first-person footage of belit sağ’s feet as she walks from one building to another with a superimposed mosaic of images from Turkish news combined with popular films and clips that gradually interact with each other.

Almudena Escobar López is an independent curator, archivist, and researcher originally from Galicia. She is Curatorial Assistant at the Memorial Art Gallery (Rochester), and is currently pursuing a PhD at the University of Rochester in visual and cultural studies. She is a member of the collective screening project On Film and co-programmed (with Herb Shellenberger) the Flaherty Seminar series “Common Visions” (2018) at Anthology Film Archives (New York), and recently joined the programming committee of Media City Festival. Her writings have appeared in Vdrome, MUBI Notebook, The Brooklyn Rail, Afterimage, Desistfilm, and Film Quarterly.

Medi(t)ating the Temporality of the Untimely

This short presents an animated meditation on motion through stillness with breath. Originally shot in single frames on 16mm with a Bolex, the artist hand-processed, hand-painted, and digitally manipulated about thirty seconds of material created during a residency for Canadian filmmaker Philip Hoffman’s process cinema workshop in Cuba.

Filmed in the murky waters of the largest boat cemetery on the Eastern Seaboard, this title reveals the hidden side of industrial development by offering a glimpse of an unsustainable capitalist economy’s eventual shipwreck through the uncanny, desolate landscape of the Witte Marine Scrap Yard on the northern shore of Staten Island.

The first of an audio-visual series that reflects on migration and the coastal landscape. Shot on the northern side of the Saint Lawrence River in Québec, the artist examines the location’s formal elements – the horizon, scale, and the frame’s borders – in relation to the subtlety of the passing time and movement.

Satirically referring to well-known eighteenth-century paintings that sexualized women for the male gaze, this title depicts a lifeless female figure hanging upside-down off a trapeze in the forest. It is part of the six-channel installation, Pictures in an Exhibition, which negotiates femininity and enacts cultural and art historical tropes with a twist.

Exploring the interaction between humans and nature in relation to contemporary fear, the title focuses on a raven-disguised woman exploring what at first appears to be a serene forest. The forest, however, follows along and gradually becomes agitated, eventually seeming to eradicate the lone figure.

Shot at the Gouffre de Lantouy in the Department of Lot in southern France, the title unwinds a series of nature’s mythical and tranquil imagery with a soundtrack that suggests the earth’s vibrations. The imagery evokes a dreamy unconscious spirit, as if the natural environment has supplanted and taken over from human beings.

Masaki Kondo is a Toronto-based writer and curator. His curatorial practice explores the potential of moving-image art as a critical means to represent, confront, and challenge a range of emerging temporalities in contemporary society. His article, “Unfolding the In-between Image: The Emergence of an Incipient Image at the Intersection of Still and Moving Images,” appeared in Contemporaneity: Historical Presence in Visual Culture (2014).