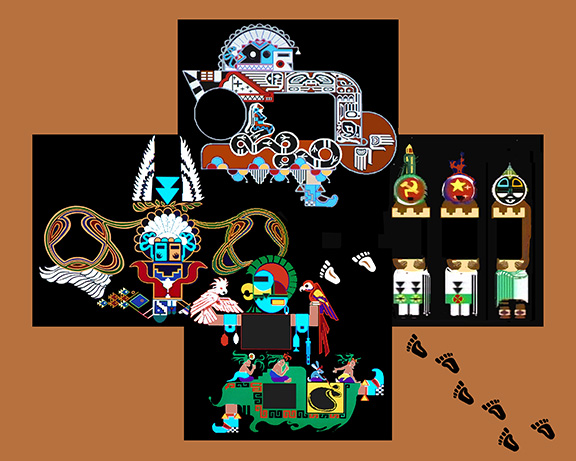 In honour of the 20th anniversary of the imagineNATIVE Film + Media Arts Festival (October 22-27, 2019), Vtape has published (see PDF link below) an essay by Dr. Dorothy Christian on the work of Hopi storyteller and filmmaker Victor Masayesva, Jr. based on the curated program she has produced for the imagineNATIVE Festival.

An interactive, intergenerational discussion of the unique experiences of each visual storyteller within the history of the development of Indigenous Cinema that will include topics such as visual/narrative sovereignty, aesthetics, the use of language, and the use of technology.

Dawsoma – Making Meaning is a reflective 88-minute program of three films by Victor Masayesva, Jr. curated by Dorothy Christian. It includes Masayesva’s first work, Hopiit (1982), as well as Ritual Clowns (1988 and 2013) and Waaki – Sanctuary (2019), his most recent film – all of which present complex interrelationships between humans, the plants, the food systems, the animals, the birds, the ceremonies and the cycles of the Earth, Sun and Moon within the universe. Victor Masayesva, Jr.’s visual stories have carved a path for generations of Indigenous filmmakers to truly tell their/our stories from a visually sovereign stance. Following the screening, the audience will have an opportunity to ask questions of one of the most influential story keepers/makers in the global Indigenous screen world.

Hopi visual storyteller/filmmaker Victor Masayesva, Jr. may be the most scrutinized Indigenous image-maker because he offers his culturally specific visuals in his film and photographic works, without explanation and without apology. He has made bold statements about Indigenous aesthetics and accountability that have led Indigenous and non-Indigenous film theorists to many iterations and interpretations of Masayesva, Jr.’s words. These have invigorated many discussions and have contributed to what that means to visual/narrative sovereignty and its many nuances. The aesthetic choices of visuals, sounds, storytelling style, language use, and manipulation of technology are steeped in his Hopi knowledge, which reflects his way of knowing, doing, and seeing in the world. Indigenous cultural knowledge perspectives are not fully understood by many film theorists and this leads to misinterpretations or mere speculations.

Dorothy Christian, Cucw-la7, PhD is from the Secwepemc and Syilx Nations of the interior of BC. Currently, she is Associate Director, Indigenous Initiatives at Simon Fraser University. Before graduate studies, Cucw-la7 worked for the national broadcaster Vision TV to bring Indigenous stories from across Turtle Island and Mexico to the Canadian screen culture.

Victor Masayesva Jr. (born 1951) is a Hopi filmmaker, video-artist, and photographer. Born on the Hopi Reservation of Arizona, and growing up in Hotevilla, Masayesva’s artistic career reflects his active participation with the Hopi community, his body of work promoting Hopi culture and worldview.