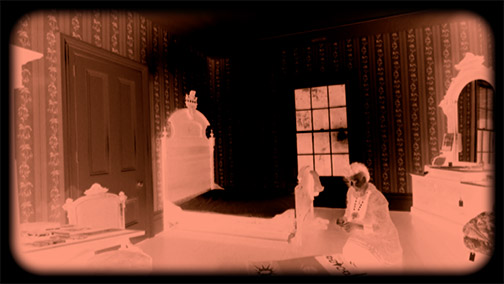 The next project that we will be showing is a new segment within Jackson 2bears and Janet Marie Rogers’ collaborative multimedia series For this Land (2015). 2bears is a Kanien’kehaka (Mohawk) multimedia artist from Six Nations and Tyendinaga, and Rogers is a Mohawk/Tuscarora writer from the Six Nations band in Ontario. The two artists cite Sioux philosopher Vine Deloria, Jr’s arguments on the incommensurability between Western theology and Indigenous spirituality as their primary inspiration for the For this Land series. In this specific iteration of the series 2bears and Rogers also claim inspiration from Mohawk poet Pauline Johnson, the place where she was born, and the house in which she grew up – an estate named Chiefswood on the Six Nations Indian Reserve. The installation that will be exhibited at Vtape will be an imaginative versioning and aesthetic interpretation of the dialogues that these two artists had with each other while spending time at the Chiefswood heritage site and after having read Johnson’s stories.

For this Land will be on view in conjunction with the imagineNATIVE Film + Media Arts Festival from October 16th to November 19th.

Jackson 2bears is a Kanien’kehaka (Mohawk) multimedia artist from Six Nations and Tyendinaga. 2bears’ has exhibited his artworks, installations and performances in solo and group exhibitions across Turtle Island, and internationally in media arts festivals and group exhibitions. 2bears is currently Professor of Native American Art Studio at the University of Lethbridge, Alberta.

Janet Rogers is a Mohawk/Tuscarora writer from the Six Nations band in Ontario. She was born in Vancouver and has been living on the traditional lands of the Coast Salish people in Victoria, British Columbia, since 1994. Janet works in the genres of poetry, spoken-word performance poetry, video poetry, recorded poetry with music, and script writing. From 2012 to 2014, Janet served as Poet Laureate of Victoria.