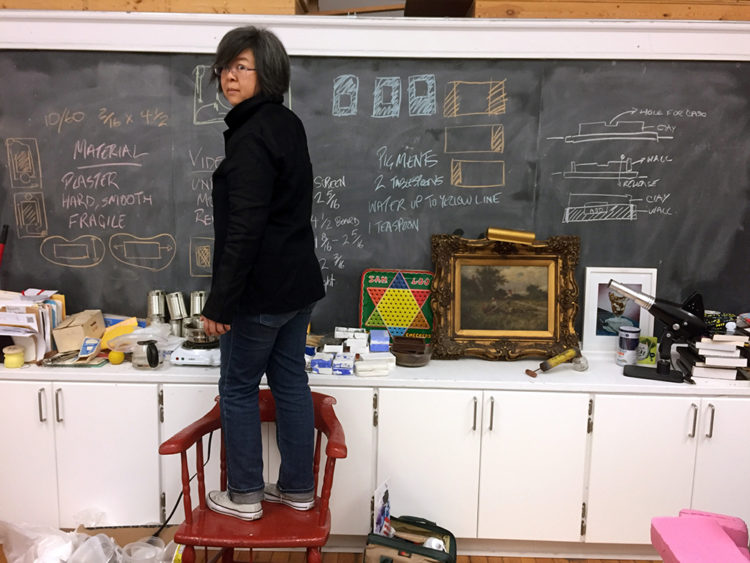 Speculating on Fictions / Dreaming in Colour: a programme of work by Midi Onodera in conversation with Lulu Wei

Vtape is proud to co-present this series of works that speak to the breadth and depth of Midi Onodera’s work  as  an artist, a filmmaker, an innovator, and an inveterate experimenter. Flowing seamlessly from toy cameras to high end editing formats, her works engage with technologies in playful ways to produce documents of cultural and political critique that are dead serious. We’ve selected works exploring the variety of production platforms, technologies, and presentation formats used by this prolific and poetic artist of both the analog and the digital.

This programme begins with an early work The Displaced View (1988). Adopting the form of an experimental documentary, Onodera probes her personal history as the descendent of Japanese immigrants who endured internment during World War II. A collage of the observed and the gathered, we see footage of Onodera and her grandmother playing GO intercut with appropriated media images of traditionally-clad women making sushi on a cooking show. At the heart is her struggle to reconcile her sexuality with her culture. As Onodera opines, “Like my mother, I’ve denied my history for so long…told always to blend in, not to stand out”, The Displaced View is a beautiful immersion into where memories reside in the human psyche.

Next we see a series of shorts. Slightseer (2001) is a work that) affirms Onodera’s commitment to cinema as a form of essential vision while Nobody Knows (2002) shows her technically experimenting with non-traditional production as she uses both a Lomographic Supersampler and an Intel Digital Movie Creator to pose questions about belonging.

Then we move to a series of works that Onodera has created to “reside on the WWW”. That is, she downloads the work of others, remakes them and then puts these remakes back on the web for audiences to view. She calls one of these on-line series “The Lonely Web” where she uses content that has been viewed fewer than 20 times (the coyotes must see the moon (2017) is from this series.) Here Onodera questions how “public” the web really is, rephrasing the philosophical question, “If a tree falls in a forest and no one is around to hear it, does it make a sound?”

Our program closes with three shorts from the on-going web-based series “Senseless and Random”. Here Onodera gives us a taste of the future as told by the past. It’s out there; you just have to have the right vision to see it. The Outsider (2019) shows Onodera at her mordant best. Cutting between a 1951 film of quintessential “mean girls” in high school who seem to be talking about “Midi Onodera” (via an awkward computer-generated voice that can’t quite pronounce her name) and a film demo of the first TV remote control (with the former very effectively cut into the latter). It’s implausible but hilarious – until you think about it. 1968 Trace Decay Theory (2019) uses footage of a “decomposed carnival”, overlaid with a variety of deteriorating filmic effects – melting, swirling, – layers of theory as a voice talks about the carnival while on-screen texts starkly remember the assassination of Robert Kennedy. Last in the series, Travel (2019) wears the poetry of Ronna Bloom lightly and beautifully, while test patterns and film leaders flash by, the texts asks about the possibility that everything could all disappear, just like that. Poof. Like I said: she’s funny and dead serious.

Midi Onodera is a recipient of the 2018 Governor General’s Award for Visual and Media Arts. She is a moving image artist who has been making work for 35+ years. She has produced over 25 independent shorts ranging from film to digital video to “low end” toy camera formats. In addition to this she created a theatrical feature film, Skin Deep and 500+ online videos. Since 2006 she has produced an annual online video project. She currently teaches video at the University of Toronto, Scarborough in the Department of Arts, Culture & Media.

Lulu Wei is a Toronto-based director and cinematographer. She holds an MFA in Documentary Media from Ryerson University. Her work explores themes of urbanization, cultural identity and queerness. Her short films and installations have been screened and exhibited at various festivals. She has worked as a cinematographer and camera operator on numerous projects, most recently on the John Greyson feature Last Car.