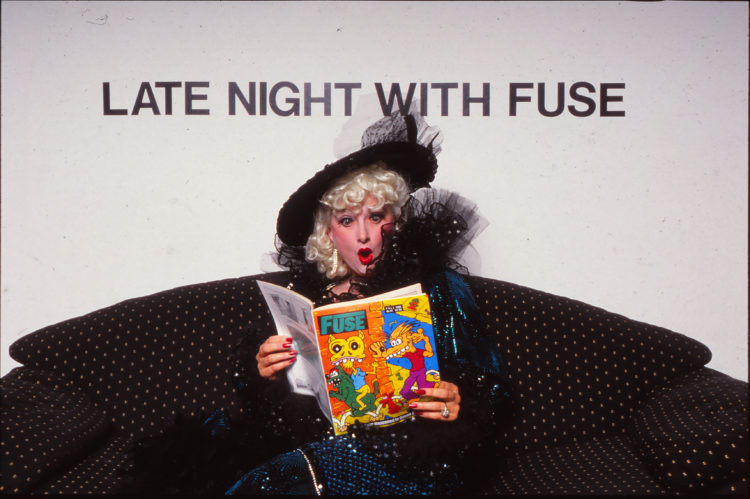 Excerpts from this live TV talk and performance show at Lee’s Palace, co-hosted by Louise Garfield (The Clichettes) and Clifton Joseph (De Dub Poets), give an archival glimpse into the Queen St. W. Toronto media arts scene in the late 1980s, which FUSE as an arts and cultural news magazine helped nurture and champion. It was taped live and cablecast in early 1998 by Rogers Cable 10 – Toronto.

It was conceived of as a “FUSE profile/FUNraising talk show [to bring] Toronto video artists, musicians, writers and performers from diverse communities on to the same late night couch. Backed up by the Livestock houseband, the flamboyant and wonderful team of Louise Garfield and Clifton Joseph co-host talk spots and performances by over 25 invited guests. The three-and-a-half programme was performed to a packed crowd, and featured custom-designed video ads produced by FUSE supporters which will be included in the four part Rogers Cable 10 upcoming cablecast…” (FUSE, Winter 1987-8, p.5)

Produced by FUSE magazine, the live event was co-ordinated by Pat Jeffries. The Late night with FUSE mural was made by Chris Reed. Complete sets of Centerfold/FUSE (1976-2014) magazine are available at the Queen’s University archives and at Artexte, Montréal.