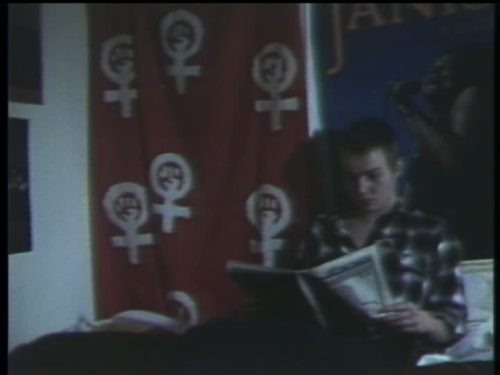 Labyris Rising is an homage to Kenneth Anger's Scorpio Rising and to a part of Toronto's lesbian life in the early 1980's.
The homo eroticism of Scorpio Rising combined with new lesbian enthusiasm were the inspirations to document friends and acquaintances hanging out in various lesbian locales.
Sites featured included the headquarters of LOOT (Lesbian Organization of Toronto) which was home to all manner of lesbian endeavour and intrigue, the In/famous Fly By Night Lounge and various lesbian houses like
Palmerston Paradise and the Lesbian Embassy.
The music was part of the lesbian hit parade which featured women musicians playing in the margins of the music industry and of course Janis.
Some femmes criticised the butchy fashion statements. Down vests were very popular and were known as the lesbian mink. Lesbians of the day invented the look- t-shirt and jacket.
Sites featured include the Lesbian Organization of Toronto (LOOT) headquarters which had a printing press in the basement, a lesbian phone line, dances, potlucks, band practices and debates on every issue and
style of lesbian politics of the day. The pool scene was shot at the in/famous Fly by Night Lounge which was
the first lesbian bar in Toronto owned and operated by lesbians and open almost nightly.