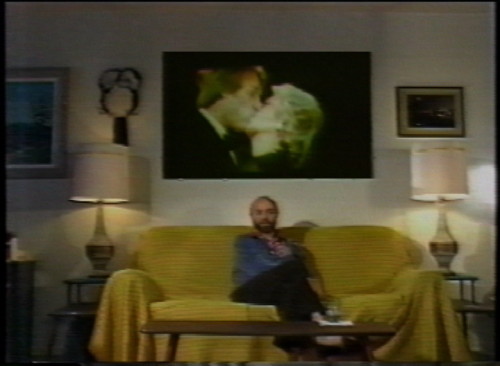 A devoted fan of a daytime soap opera "The Young and the Restless" narrates in one half hour the events over seven years of his favorite 'soap'. The recounting of the characters' trials and tribulations is punctuated by the subtly changing decor within the narrator's apartment. At the same time, a mirror behind him alternatively reflects his apartment or reveals scenes from the 'soap'.

"Two Way Mirror" is the fifth program in a series of six programs commissioned for television broadcast entitled "Television By Artists", produced and curated by John Watt in 1980.

Philip Monk, art critic reviews "Two Way Mirror", "as attempts to undermine our, at times automatic, belief in the reality of television. A man sitting on a sofa faces the viewer, as if the viewer were a conversant or a television set, and relates the history of a soap opera he has been watching for seven years. Above his head, the "two-way" mirror flashes edited stills showing the characters named as if they were family slides. Besides the alternating images and reflections, the objects on the wall begin to change. What first appear to be bad edits show the program to be a construction; throw the truth of the narrator's statements into question - for instance it is not his living room, but a set; and demand that we 'pay attention' as our minds slip away from this impossibly boring monologue of a supposedly seamless soap opera. This type of program is seamless because it never ends; it has been given reality by its insertion into people's daily lives; and it reflects the viewers' desires. As the opening and closing shots conflate the mirror and our television sets, television becomes that two-way mirror; it lets us see through and reflects our image - alternative or inattentive; but is not yet two-way television".

"Two Way Mirror" is in the collection of the National Gallery of Canada.