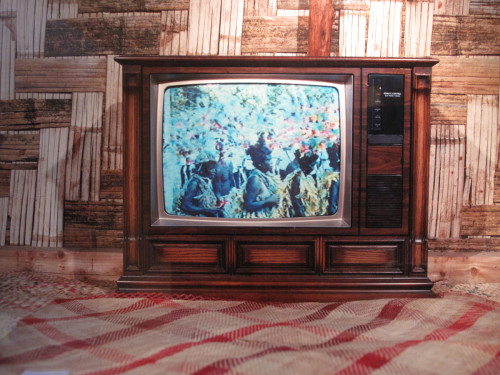 A simulated day of television programming created with the people of Vanuatu, a culture without television and in many areas without electricity or technology. The result of my investigation is presented within the context of a traditional Island dwelling. I ask you to consider the way we living in a modern technological environment use video and television to contextualize other cultures.

"I first went to Vanuatu to visit my brother Peter in 1983. Pete, a Cape Breton lobster fisherman, was down there as an aid worker for C.U.S.O., helping develop a fishing industry. Pete was living on the Island of Paama, where he was the only white man on the island.

The people of Paama, like most of the island people of Vanuatu, have had little contact with the white industrialized world. I realized immediately this was a chance for me to witness the inevitable demise and development of a so called 'primitive' society. I felt a need to learn about this endangered society. My instincts told me to document everything." - J.W.

An autobiographical Travel Adventure set on an improbable course from Cape Breton Canada to the exotic South Pacific islands of Vanuatu.

A multidimensional narrative combining storytelling, 200 photographs, video and audio that transports you virtually into the author’s world of foreign landscapes both natural and cultural.

Peter Watt, a fisherman, aid worker, and adventurer living and working in two strikingly different communities, is our guide on this fascinating journey.

Set in the 1970’s and ‘80s, a time of counterculture, social change, and experimentation; Gone Fishing with the Natives is a must read for NGOs, travellers, and all those with a spirit of adventure and concern for the sustainability of our oceans.