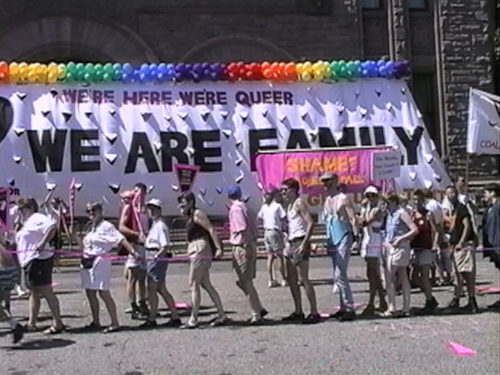 Gay Pride and Prejudice juxtaposes in a satirical way - gay pride and prejudice - contrasting the street and the legislature during the events of June and July - the debate and defeat of Bill 167, The Equality Rights Statute Law Amendment Act, in the Ontario Legislation.
The video examines the historic debate on "same sex benefits". Bill 167, moved beyond the narrow confines of "non discrimination" to remove systemic discrimination against gays and lesbians in access to rights and benefits.
Gay Pride and Prejudice lends itself to a multiple layering of interpretation, through the juxtaposition of image and content on two monitors and through a series of subtextual references. Two historical figures haunt the work, Jane Austin and Oscar Wilde. Both are millennium figures - one of the 1790's: whose works give novelistic expression to the conservative ideology of Edmund Burke; but who also exposes the underlying unrest and tensions within the idealized middle class, especially of the family, sexuality and women - the other figure of the 1890's: an aesthete, "dandy", tried for his homosexuality in a context of a notorious show trial; his life destroyed.
These two figures resonate with particular pathos and cruelty in the context of a major public debate on homosexuality, the family and sexuality in 1994.
(note: Gay Pride and Prejudice has two parts, left side and right side. Each is 62:00 long.)