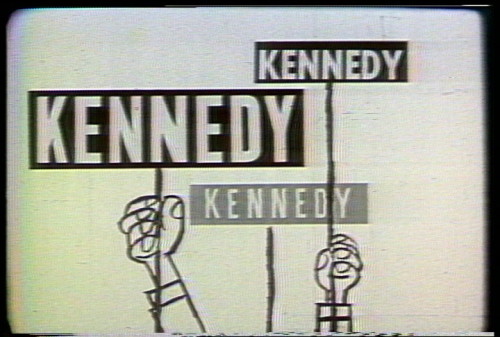 Political Advertisement III 1950's - 92 is the latest installment in Muntadas/Reese's anthology of American Presidential Campaign ads. It is the third version since Muntadas/ Reese began editing the compilation in 1984.

Presidential candidates are sold like commercial products and television is naturally the ideal medium. Political Advertisement concerns the trends of the last thirty years and depicts the styles and evolution of political ads.
In the beginning, television was a novelty. It was regarded as an unlikely and suspicious medium for political statements. The Eisenhower ads ;in 1952 and 1956 changed all that. They were an unqualified success. They spawned a new philosophy -- the hard sell -- and they compelled admen and politicians to take note of the impact TV could bear. In the ensuing years the form and content of political ads have come closer and closer, in fact, they have altogether disappeared.

Political Advertisement III traces how political campaigns interact with commercials and how special effects and computer graphics blend with patriotism.