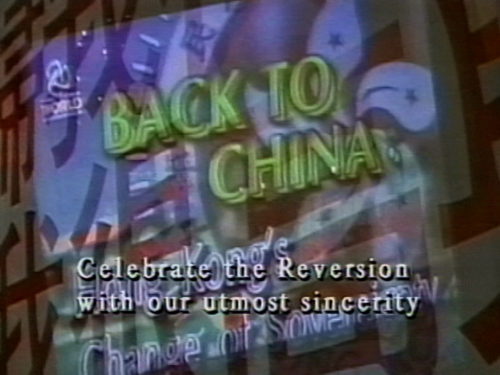 Tourists flocked to expensive gourmet parties with a harbour view watching fireworks or spent the night crashing bottles in the streets, in bright red Suzie Wong dresses, or in costumes made out of British and Chinese flags.
Media coverage, local and international, described how thrilled Hong Kong people were about the change of hands at midnight. It's somehow exactly the same version as on the PRC official media.
I was invited to a gathering at Hong Kong Arts Centre to watch television together as if it's something too scary to do by yourself. It turned out to be a gathering of local artists singing songs and telling stories, in rage and despair, against a room decorated in words of bright red: "REUNIFICATION 1997; I AM VERY HAPPY". Later I went to the Central part of town to find thousands of people rallying in Victoria Square. At midnight , they released multi-color balloons, wrapped a huge yellow ribbon around the Legislative Council building three times, where the locally elected pro-democratic legislators were being replaced by the Beijing appointed members. The protest and rally was illegal under the new Hong Kong law. The police blocked the area around the Council soon afterwards, calling it "private property". The rally continued as a marching protest, carrying the yellow ribbon, up to the Office of the newly Beijing appointed Chief Executive.