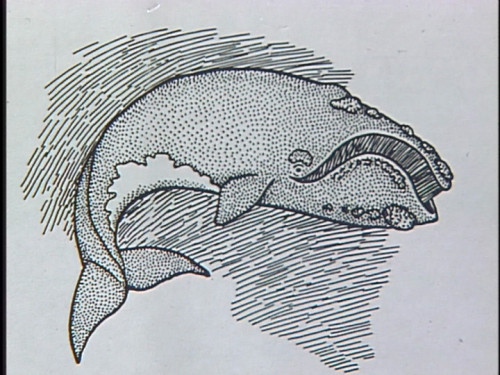 For untold centuries Inuit hunted the huge bowhead, or 'right' whale, as a main source of food, heating oil and building materials. As with all animals, Inuit hunters take only what they can use. Starting in the 1700's until the close of the 19th century, commercial whalers from Europe and America wiped out almost the entire world's population of bowhead whales.

In the mid-20th century, the Canadian government made the eastern Arctic bowhead hunt illegal. While Inuit were not responsible for the near-extinction of the bowhead, they are still prohibited from hunting it like everyone else. In 1994 one of Canada's most respected Inuit elders - 95 year old Noah Piugatuk - announced that he wanted to taste the bowhead whale one more time before he died. Honouring the elder's wish, Piugatuk's son-in-law caught an illegal whale near Igloolik in September 1994. A few months later, the whale hunters were charged and ordered to stand trial. In June 1996, the government finally dropped all charges against the Igloolik hunters. In August 1996, Inuit hunters from across the arctic gathered in Repulse Bay to catch the first legal bowhead in more than forty years. Arviq! traces the history of the bowhead in the Arctic up to the first legal hunt in 1996.