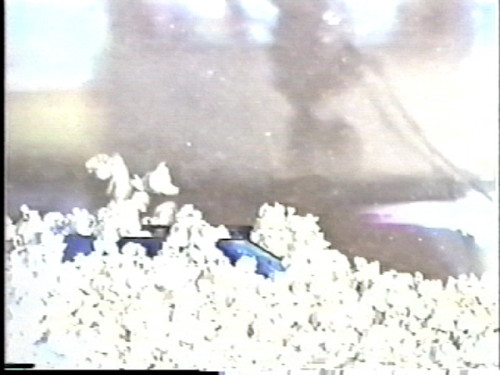 1. orange crush, 1993, 2:00 - six people, six little anecdotes about the soft drink
2. spit trick, 1999, 2:00 - a short video fit to be shown either on real teevee of stupid trick or now that is incredible or dumb home movies if there were such programs on contemporary television, a woman who does spit ricks for the camera; you won't see this on national television.
3. most beautiful girl, 1999, 2:00 - singing along on a hand spun '45 player to charlie rich's rendition of most beautiful girl, set to frantic pace of busy laundromat in new york city.
4. a couple and a thief, 1999, 2:00 - super 8 (b/w) two people selling things in public, despite what people say about art, people do understand something about buying and if something is cheap enough any passerby might consider looking at things offered...set to a narrated story about a couple I heard as a child.
5. thirty days of solitude, 1999, 2:00 - shot on super 8 film, about doing something everyday.
6. true confession #1, 1999, 2:00 - road movie shot on super 8 film, narrator confesses to a make belief crime of confusion and operation of karma.
7. making money: wasting time, 1999, 2:00 - a story which first appeared in some german newspaper caught my fancy because it mentioned street/performance art... initially i was drawn to this story because this was a story that will never take place in north america.
8. a dream, 1999 1:00 - i've only seen pictures of che guevara (i think of him as modern day romantic hero) how will i even know if he appeared in my dreams especially as my landlord all dressed in a business suit instead of his usual battle fatigue. i did a lot of looking out of the window, few months i lived in new york city, during this time i thought a lot about '70's structuralist films and about looking and time... i decided it was time to remake some of them but with updated sensibilities.