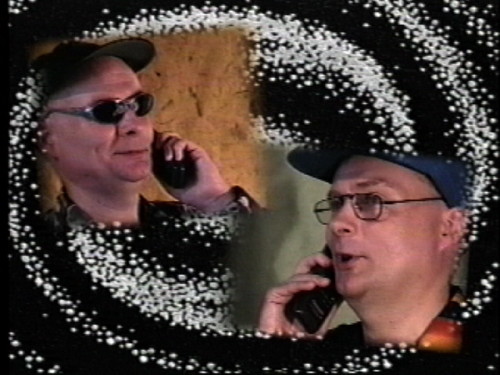 Cash and Carry is a short digital-videotape responding to a call for works concerning the future of money, banking, and capitalism. The tape sets bureaucrats /mandarins/ pundits Mr. A and Mr. B (portrayed by myself, as in my earlier tape Controlled Environments), are now suspended in a cyber- vortex in which they debate, over their telephones, the current global economy. Are there in fact any alternatives to multi-national global capitalism in a world in which national and spatial borders and boundaries have become technologically obsolete?
As Mr. A and Mr. B discuss degrees of capitalism and the politics of cash and digital economies; their vortex dissolves or time-travels into a local bar owned by, probably among others, our two pundits. At this gender-mixed bar; a male waiter is having difficulty receiving payment for a draft ordered by a suited male customer. This exchange is viewed by the two bureaucrats or pundits who observe the cash and carry negotiations with humourous analysis. The service worker is a player in a cash rather than a digital economy and thus he must be reimbursed for his own investment; so he denies the pint of draft beer to the customer who is reluctant to fork over the cash. It seems that the differences between barter and banter have become rather slippery, according to Mr. A and Mr. B. But, when they again observe the bar through their surveillance-system, they observe that the waiter and customer were truly playing a game in the staff washroom - we can see that the waiter is a prostitute and the customer is a john.
Cash and Carry mixes digital philosophical discourses with surveillance-tinted video reflecting the medium’s contradictory origins. The two pundits are amused by the waiter’s participation in the underground economy but other transgressors might not fare so fortunately. The tape juxtaposes the global with the local as the waiter/prostitute is lauded as an individual who acts locally while thinking globally. While boundaries between nations and multi-national corporate interests become more and more streamlined despite their contradictory rhetoric of free-trade zones and chaos theories; individual cash and carry negotiations will always be occurring as long as the money system is still the root of exchange economies.
Cash and Carry was commissioned and produced by Ed Video in Guelph, Ontario as part of their annual Don’t Bank On It fest.