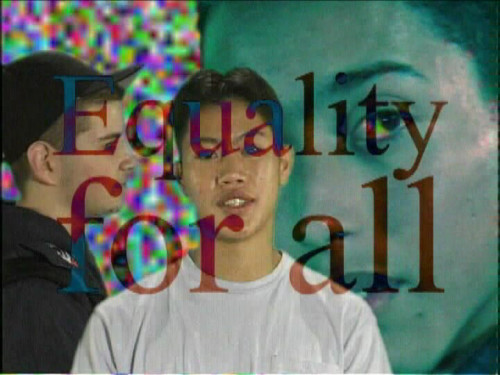 The Refugee Class of 2000 are three TV ads produced as part of the Unite Against Racism campaign mounted by the Canadian Race Relations Foundation. These ads started airing nationally on Jan. 15, 2000.
The central subjects are thirty four Grade 12 students from the graduating class of 2000 of Sir Charles Tupper Secondary School. Tupper is in a working class culturally diverse neighbourhood in Vancouver. Many of the students are first generation born Canadians. Grad students were chosen as the demographic group, they straddle two centuries, the violent racist past and representing the hopes and dreams of a better future in the new multicultural world.
The students make six statements: "My name is, I was born, I am a refugee, I am a and I want to be". The voices and faces are inter cut with pictures, words, graphics and images depicting racist, sexist, political, religious social unrest. The tape juxtaposes historical acts of institutionalized racism with current events. The concept was inspired by the recent arrival of refugees on the BC coast and by the racially motivated intolerance shown to the Chinese boat people.
the use of everyday racial, sexist and homophobic slurs are presented as equal culprits in how we as a society construct and enforce stereotypes. The aim is to jolt viewers to think about 'polite racism' as being just as insidious as more overt forms. "we must try to forgive what is past" and "zero tolerance" are the last words to appear, many of the quotes appearing in the tapes are adapted from speeches by Her Excellency Adrienne Clarkson Governor General of Canada.