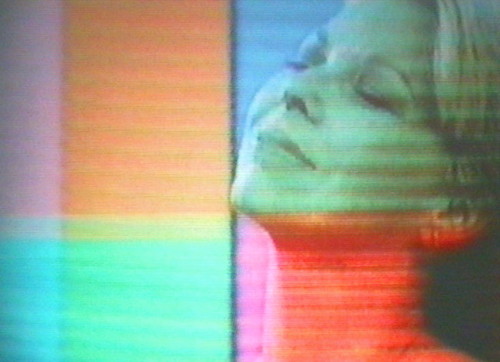 A short study of the relationship between words and meaning. Looped video footage, filmed at a TV equipment trade show, provides the (somewhat mesmerising) image of a woman sitting in front of a waterfall. This image appears to be truthful, just as the statement "A famous filmmaker said 'cinema is the history of men filming women'" appears to be truthful. As the work progresses, the twelve words which form this original statement are rearranged to both alter and corrupt the meaning of the original sentence. Simultaneously, the image is revealed as total artifice, comprised of several electronic layers. The woman is not in front of a waterfall, but is in fact sitting in front of a blue screen in a studio. Layers of meaning are constructed, broken down and reformed to reveal that every filmed image is a highly contrived artifact.