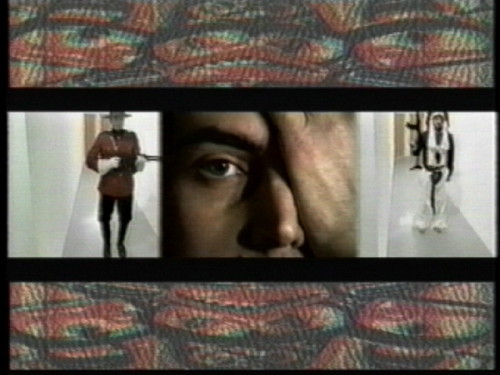 Curios and Other Trinkets

Initially starting out as a single channel video project based on the infamous postcard depicting Chief Red Cloud shaking hands with a Member of the Royal Canadian Mounted Police. I wanted to expand the possibilities of an implied relationship between the two men shaking hands in the postcard. As icons they are cultural symbols that refer to the Nation State of Canada and their relationship with the First Nations of North America. From the original postcard we are obviously meant to conclude that this relationship has been an
amicable one, but the reality in the past or even recently is not the case.

The three monitor installation constructs scenes that symbolically represent the view of an individual walking down a long corridor, which may be thought of as a history itself. However, this is a reconstructed history and not a natural history. Science through ethnology as played a role in defining the stereotypes of Indianness and those definitions have been used by bureaucracies and the Canadian State to justify their policies toward Aboriginal People. The centre monitor represents this to us in the image of E.S. Curtis (an ethnographer concerned with the documentation of an idealized Native people) postcards and their mimicry. The side monitors can be seen as rooms that one looks into as they pass through the hallway. In each room we find the Mountie‚ and the Chief‚ playing out different roles of historical significance in the relationship of Canada to First Nations people, as well they may also reflect current relationships between the police and individuals
of First Nations decent. As one looks from the left side monitor to the right one notices that the role of the Mountie‚ and Chief‚ are reversed this is meant to indicate a more dynamic and deeper relationship than the simple stereotypes might otherwise suggest.