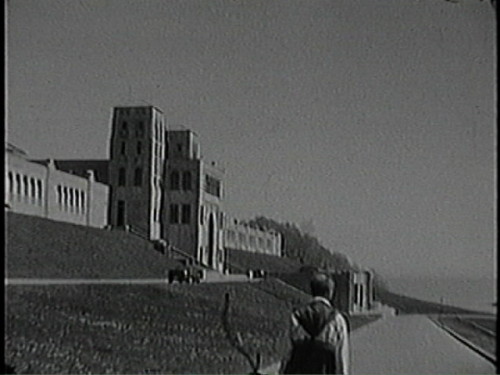 This super-8 film was originally made in response to an invitation to produce a short Super-8 for the 1999 Splice This festival. The theme of the numerous commissions was 'flawed'. Loosely respecting the 'flawed' theme, I composed a series of location tracking shots throughout various Toronto landmarks and institutions. Some of the landmarks are more iconic than others, and some are characterized by activities commercial, transactional, and sexual. The monologue written in tandem with the film sequence is typical of many of my ongoing concerns - the mind as an agent of the body rather than something separate, the belief that knowledge is acquired by means of fluid interplay rather than static absorption, and the feeling that intellectuals are in fact very sexy. This monologue also reflects my love/hate with exchange systems and dialectical materialism.

I was attracted to using black and white Super-8 film as I find the material and medium to be highly photographic. The underground sequence appears to be rather noir. Other work I have completed recently, such as my contribution to John Marriott's book and CD I've Got To Stop Talking To Myself, reflects my interest in specific location photography and its subsequent reverberations.

The Walking Philosopher was shot with Jim MacSwain's Super-8 camera in early May, 1999. the title plate was shot from my computer face of the date. Additional credits are on file.

Previously exhibited at Splice This 1999; CanZine 1999; YYZ's 20th Anniversary Members' show and at Pleasure Dome's New Toronto Works, Feb. 2001.
I have decided to make this film available on video as I wish to project the film master (with accompanying sound cassette) only in tandem with personal appearances and to preserve the master. I also think the film might be interesting to wider audiences than reached by means of in-person Super-8 presentation.