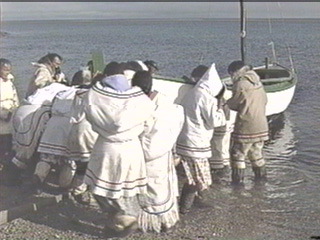 Rapid change from traditional to modern life in Nunavut, like many post-colonial societies, has concentrated power, wealth and information in a few hands. Far-reaching decisions are being made daily by a mostly-unelected political elite with minimal input from under-informed citizens scattered over enormous distances.

With no elected legislature in place until April 1999, Inuit organizations and their government advisors made these decisions on trust. 'Soft' media coverage is provided by these same insiders themselves: government agencies like CBC radio/TV and Goverment of NWT Information Networks, or the Inuit establishment through politically-controlled sources like IBC and TVNC. The absence of independent Inuit media scrutiny means there is little criticism or public debate about these important decisions.

Nipi examines fundamental questions of democracy, power and change in Nunavut and indirectly in Canada itself: in education, religion, gender, lifestyle, the distribution of economic development and the make-up and inner structure of the new leadership class.