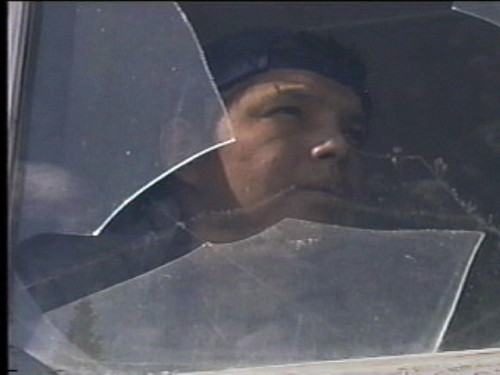 The Child Suffers...but all they see is a gas sniffer - Innu language

The Child Suffers... is an Innu Nation video narrated by two youths Dominic Rich of Sheshatshiu and Nympha Rich of Davis Inlet, Labrador. Both youth struggle with the bleak existence in remote communities that are plagued with alcoholism, violence, poverty and suicide.
This film is dedicated to the Innu youth that have died tragically before their time. Dominic Rich is a troubled young artist. Dominic is trying to come to terms with the suicide of his brother Mr.T. while struggling with his own demons like drugs and alcohol, but primarily Dominic struggles with his addiction to sniffing gasoline.
The suicide of Mr T brought international attention to the Innu people when John Pierre Ashini (father of Dominic and Mr T) was in the UK to launch a campaign with Survival International called "Canada's Tibet, the Killing of the Innu" when he received word that his son had committed suicide by shooting himself.
Nympha Rich exists in the remote community of Davis Inlet and tries to put her life in order by learning traditional values of the Innu as taught to her by her elders. Nympha discuss' her addiction to gas and links it to her family and their struggles with poverty and alcoholism.
This film deals with the wasting of young people, their feeling of despair and hopelessness.. It also looks at the impact that alcohol has had on the community by way of a woman who lost six children in house fire on Feb
14/92. The film is told in it's entirety by Innu film makers that are behind the camera and edited in a way that makes sense of their world to them.