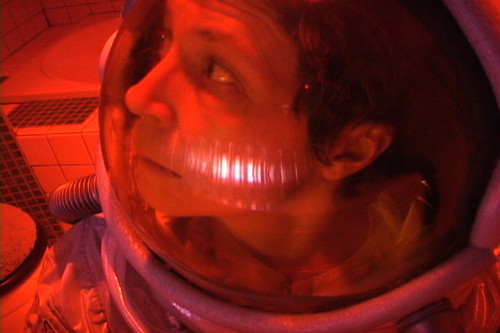 The Mission 2000 4:21
With the exception of one brief sequence, this tape is a shot for shot recreation - edited in camera - of the opening scene of Francis Coppola's 1979 landmark, Apocalypse Now, with Householder in the role of Captain Benjamin Willard. Reputedly it took 8 hours to film a seriously drunk Martin Sheen improvising his actions in this soul baring scene; an ordeal that contributed to the heart attack he suffered a few days later.
This comedic yet unnerving piece may be seen as a probing into the processes of identification. By replacing Sheen's body with her own Householder calls into question the gendering of redemption as Yael masterfully duplicates Storaro's Academy Award winning cinematography dogma‚ style.
December 31, 2000 7:20
December 31, 2000 is a shot-for-shot recreation of the pivotal scene in Stanley Kubrick's classic 2001: A Space Odyssey. Dave is in the process of dismantling HAL, the renegade and recalcitrant computer. On December 31, 2000, Kubrick's apocalyptic dream has not yet been realized. The domestic scene supplants the space station and household appliances are the conduit through which Dave (Johanna Householder) emerges and enters the spaceship in order to render HAL powerless. In an ironic reversal, December 31, 2000 underscores the failure of the future.
Next To Last Tango 2001 7:00
Next to Last Tango is a shot-for-shot reenactment of the notorious "butter Scene" in Bernardo Bertolucci's classic Last Tango In Paris. Maria Schneider and Marlon Brando meet for anonymous sex in a vacant Paris apartment.