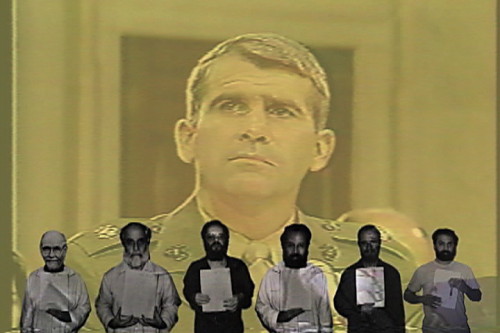 Hostage: The Bachar Tapes (English version) is an experimental videotape about "The Western Hostage Crisis." The crisis refers to the abduction and detention in Lebanon in the 1980s and early 1990s of western men like Terry Anderson and Terry Waite by "Islamic militants." This episode directly and indirectly consumed Lebanese, US, French and British political and public life, and precipitated a number of high profile political scandals like the Iran-Contra affair in the US.

In Hostage: The Bachar Tapes (English version) the "Western Hostage Crisis" is examined through the imaginary testimony of Souheil Bachar. Souheil Bachar was held hostage in Lebanon between 1983 and 1993. What is remarkable about Souheil’s captivity is that he was the only Arab man to have been detained with the western hostages kidnapped in Beirut in the 1980s. In fact, Souheil was held for 3 months in 1985 in the same cell as five American men: Terry Anderson, Thomas Sutherland, Benjamin Weir, Marting Jenco and David Jacobsen.

In 1999, Souheil Bachar collaborated with The Atlas Group (a non-profit cultural research foundation based in Lebanon) to produce 53 videotapes about his captivity. Tapes #17 and #31 are the only two tapes Bachar makes available outside of Lebanon. In the tapes, Bachar addresses the cultural, textual, and sexual aspects of his detention with the Americans.