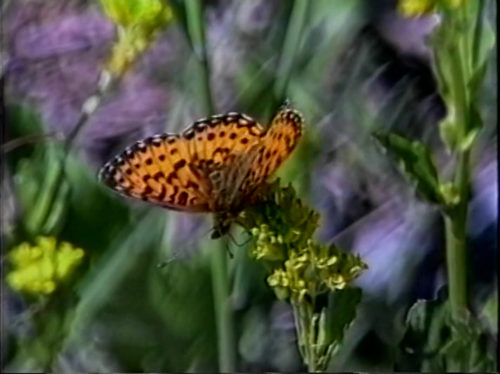 Medicine Tent is a video installation by Mike MacDonald. Using three projectors the images are seen on the sides of a teepee. The tapes are nine minutes long and silent. In addition to the electronic equipment the artist uses an air ionizer to make the air around the installation fresh and clean. Videotaped on MacDonald's native turf, traditional Mi’kmaq territory in eastern Canada, the work focuses on healing plants. The show is silent in respect of the native tradition of not revealing too much about traditional medicines. MacDonald maintains that you do not have to consume the plants to be aided by them and his work does seem to have a healing effect.

Opening at the side of a lake the scene widens to dryer ecosystems. As well as the plants and flowers we see frogs and butterflies, two life forms often used symbolically, that seem to be in peril because of pollution.

MacDonald's work focused on native and environmental issues and plea without polemics or didactics for a careful and considered use of land and natural resources. His later works are generally silent and he uses fabric to soften the hard edges of technology in this work as will as in his previous installation, Touched by the Tears of a Butterfly. Medicine Tent premiered at the Edmonton Art Gallery in April 1999 and was presented at Sacred Circle Gallery in Seattle in October 2000. MacDonald's work has been shown widely throughout North America and Europe. In January 1997, he was part of an exhibition at the Canadian Cultural Centre in Paris. In 1994, he received a VIVA Award from the Shadbolt Foundation for his significant contributions to the arts in Canada. In 2000, he received the first Aboriginal Achievement Award for New Media presented by The Centre for Aboriginal Media at the first imagiNATIVE Festival in Toronto.