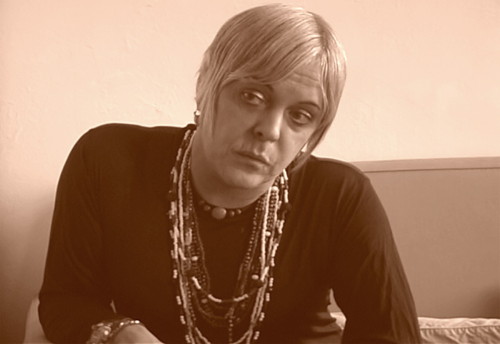 PRODUCT (Diary of a Disco Dolly)

PRODUCT (Diary of a Disco Dolly) was conceived as an anthropological urban study, and has become a public outlet for how fringe culture is produced and redistributed to the masses. Titles are available individually.

MOMUS-AROUND THE WORLD IN 80 DAYS (9 minutes-2003) Scottish born Electronic-folk singer Momus (a.k.a. Nick Currie) is recognized for his extremely eclectic and diverse style of music and his acclaimed Folktronic album. His 1998 album Little Red Songbook resulted in a costly lawsuit issued by electronic composer Wendy Carlos. To recuperate his losses, Momus offered to write a song for anyone who donated $1,000 towards his legal costs. He ended up writing 30 "musical portraits", which featured on the self-released Stars Forever, a magnificent epic which also included karaoke renditions of Momus songs by his fans.

CRUTCH MASTER (9 minutes-2004) Bill Shannon , better known by his B-boy moniker "Crutchmaster", has a career that defies all categories. Renowned in the underground club-dance scene Bill Shannon has invented a unique and vibrant dance technique. He considers himself a performance artist rather than a dancer and defines his work as rooted in street culture but informed by the fine arts. Crutchmaster's mix stems from philosophy as well as physical necessity as he lives with a degenerative hip condition. He has developed a version of skateboarding and hip-hop that incorporates his crutches literally.

AMANDA LEPORE (7 minutes-2002) Tran-sexual Amanda Lepore is one of New York's most photographed celebrities. Muse to photographer David Lachapelle, Swatch-Watch model, recording artist, and one of today's most influential trans-gendered performers. A cartoon like 50's bombshell (a cross between Jayne Mansfield and Jessica Rabbit) Lepore discusses her transformation from suburban youth to underground star.

ANTONY AND THE JOHNSONS (7 minutes-2003) A look into the life and work surrounding brilliant New York singer Antony, a performance artist troupe that sometimes collaborates with Antony (Johanna Constantine and Julia Yasuda), and his orchestra "The Johnsons". Antony was co-founder of the legendary underground Black Lips Performance Cult. Antony and the Johnson's are currently on tour with Lou Reed and are also featured at the 2004 Whitney Bienniale.