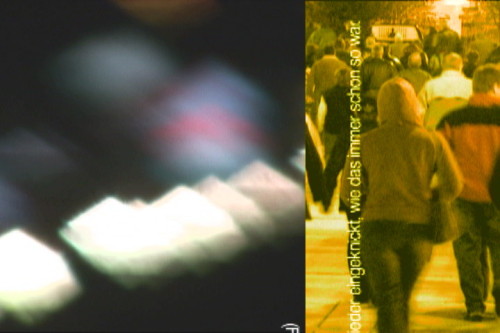 Pristine Distortion is an experimental single channel video that is a meditation on mass media. The central concept is that nature through the metaphoric use of the landscape image is a separate reality beyond that of contemporary human experience. Through out the video are inferences to landscape and images of nature but they are always seen through the abstracted reflections in buildings and automobiles. The landscape is almost always contained within the grid of an architectural structure. The images are treated with extreme color correction that has a tendency to make the video image flat and very graphic in effect. The editing style uses simultaneous multi-panel video images to create abstracted and symbolic compositions. Through out the video there is a text narrative in German but it is not there to explain the images or give context to the video. Instead, the text has been reduced to another graphic element within the video. This relationship is ironic following its own path the text may or may not create interesting juxtapositions with other video elements. Narrative it implies is based loosely on a conversation between two women at a market. One woman is talking about her son being involved in the Gulf War, which echoes part of the audio track - also drawing references to mass media coverage of the war. This is not a work necessarily about the Gulf War but it was made at the time of the war. We wanted to capture some of that irony between the reality of the war as it related to people in North America and Europe and how mass media manufactured the image of the war. The resulting video is broad in scope and aesthetic approach but has a succinct and strong formal quality.