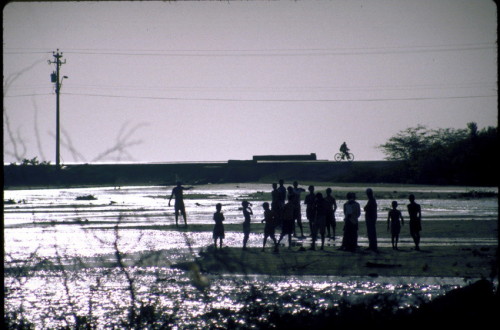 Quienes Son? (Who are they?)

In October 1962, the world was at a standstill. In response to the failed invasion of Cuba by the United States, the Soviet Union began a buildup of offensive missiles on the island. The United States, in turn, imposed a blockade on Cuba and demanded that the Soviets dismantle their arms. After two tense weeks, the Soviets finally agreed, and in exchange, the Americans promised to never invade. This promise, however, never fully allayed Cuban fears of an attack….

"Quienes Son?" is an experimental short film that combines elements of documentary with fantasy to portray a surreal vision of Cuba. "Quienes Son? "uses an "extraterrestrial" metaphor to look at the lighter side of a possible Cuban invasion. The film presents a set of testimonials regarding the appearance of "extraterrestrials" in the island. These sequences are woven together with the perspectives of the interviewer, and by the implied presence of the roaming intruder. Adding to this mixture are excerpts from Cuban radio that denounce the cultural and economical dominance of the United States, and a mysterious and spacey original score.

While many films either romanticize Cuba's system, or critique the current regime, "Quienes Son?" aims to look at the lighter side of Cuba's fear of an invasion. Who are the aliens? Are they coming from outer space or Cape Canaveral?

Today, Cuba is in a surreal zone, caught between the remnants of socialism and the harsh competitive reality of capitalism. Ever since the demise of the eastern bloc, Cuba has gone to great lengths to continue adhering to its ideology while being forced to concede some reforms. The ensuing economic and social "invasion" has and will continue to cast profound changes as the country eventually clashes with its post-Castro future. "Quienes Son" is the first film in a series that will take unconventional views of an ever-more globalized world.