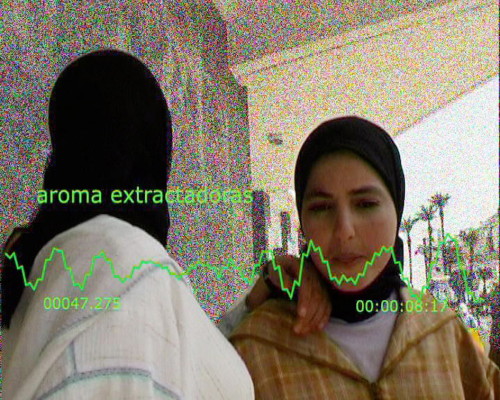 "Material reality comes into being in the most surprising and diverse ways," prologs the video. A meteorite crashes down on the Moroccan desert, which is being patrolled by military jets. Berber nomads report the event to U.S. astro-scientists who classify and name the larger piece Bensour, while local dealers sell the smaller ones to tourists. This obscure incident makes a set of spatial and material relations visible. A space emerges from the convergence of astrophysical recordings, military reconnaissance, the living space of the nomads and the market of traders. Their presence in the area is temporary and transitory yet their distinct paths relate to one another through the event of the fall. All of them give cultural meaning to the space and to each other.
border log I: smuggling - a cartography of struggle
The site is the border between Morocco and the Spanish enclave-city Ceuta, embedded in an otherwise Moroccan landscape. Smuggling is an integral part of the daily border culture that is performed, for the most part, by Moroccan women. Circumscribing the architecture of the authorities up to eleven times a day, they inhabit the border in a non-linear, circular way, carving out an existence for themselves. Striving for the best possible mobility for crossing, the female smugglers strap clothes to their body, layer by layer, until they have doubled their body volume. Every piece increases the profit margin of their passage. The economic logic inscribes itself onto every layer of the transforming, mobile, female body.

border log II: living in a time lapse
Another repetitive movement that constitutes the border between Ceuta and Morocco is the daily commute of the "domesticas", the Moroccan maids who work in Spanish households in the enclave. Since two bordering areas are located in district time zones with a two-hour time difference, the maids turn into permanent time travelers within the border economy. Deferred time becomes the mode of their cultural positionality.

border log III: entering the transnational zone
This last part is moving into the transnational zone in northern Africa where biological, textile, and technological products are being manipulated for the European market. Subcontracting enterprises in Tangier hold generic name creations such as Boratex, Sotema, Europlex, or Sotradex, invisibly services and conforming goods to Euronorm standards. Finally the video crosses the Strait to the plastic covered high productivity fields in Andalusia where an immigrant workforce cultivates vegetables according to EU norms.

All these trajectories move around and in between the imperative of the territorial borders yet they constitute the cultural and economic space between Europe and Africa.