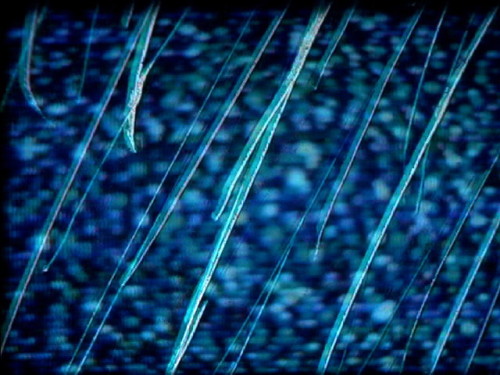 Missile: The Omnipresence of Waves

Television static: part Rothko, part Gramsci. High-entropy noise. Inescapable radioactivity. We are surrounded--even boxed in--by waves of all kinds. When did it all start, and when will it end, if ever? Before the world-wide-web, there was short wave radio.

“Missile” is an experiment in found sound and images. Switch on the radio. At first it may sound like rain, but if you get the right channel you might hear Grappelli and Django performing a swinging duet in Paris; turn the dial ever so slightly, and you may find Mao Tse Tung grooving to the sounds of his own real peculiar cultural revolution. Turn on the TV these days, and you never know what you'll find…

This film was created for the Splice This Super 8 Film Festival in Toronto in 2001. I built an aluminum foil radio antenna in the shape of a giant daisy. Then I attached three separate short wave radios to the antenna and patched them into a mixer. Through my headphones I could hear radio fuzz, random bursts of static, bleeps, religious zealots and freaks from Mexico to Beijing. While the footage was projected onto the screen, I mixed a “live” one-time-only soundtrack using found sounds.

This project was originally inspired by Nevil Shute's novel “On the Beach,” published in 1957:

“If the Geiger counter was correct, no life could exist there more than a few days, and yet it all looked so normal in the spring sunlight that he felt there must be people there…”