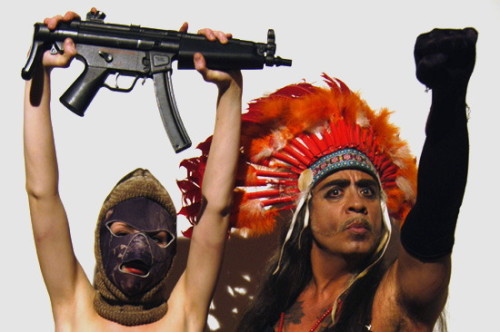 As a "Post-Mexican" performance artist operating out of the US for over 20 years, one of my conceptual obsessions has been to constantly reposition myself within the hegemonic maps. Whether this map is the Americas, the larger cartography of art, or my personal biography, one of my jobs has been to move around, cross dangerous borders, disappear and reappear somewhere else, and in the process create "imaginary cartographies" capable of containing the complexities of my multiple and ever-changing identities, voices, communities and performative bodies. This "cartographic project" came to an impass on 9/11, when suddenly all our geo-political-cultural certainties went berserk. Overnight, theological cowboy emperor Jorge W. Bush imposed a new simplistic and binary map dividing the world into "us" and "them": "us" meaning strictly those who agreed unconditionally with his imperial policies, and "them," meaning all savages determined to destroy "democracy" and "western civilization." Bush's "America" became a euphemism for a place inhabited by warmongers and savage capitalists disguised as freedom-loving patriots and innocent victims of evil. And those invested in destroying Bush's "America" were not only all terrorist sympathizers-even indirect sponsors-but eventually everyone who criticized his fascist policies, including "us," the critical intellectuals and artists from throughout the world. "We" no longer had a place in Bush's cartography. "We" were not to question his worldview.

In November of 2003 I began to write this text. It was my clumsy attempt at finding a post-9/11 voice and place in another map-an imaginary one drafted by me. As I drafted this poetic cartography my goal was to rescue the pronoun "we" (our multiple communities) and in the process establish symbolic connections between my psyche, body, language, dreams and aspirations, and those of my contemporaries. My new map began to expand to include migrants, bohemians, activists and critical intellectuals from this and other countries. I was fully aware that it was an exercise in radical imagination that could only become a temporary reality in performance mode. At the end of my 4 month literary adventure, I titled the piece "A Declaration of Poetic Disobedience from the New Border." Part chant poetry and part political exorcism, this "declaration" could be described as both performance and performative literature. It was meant to be declared publicly and ritually; to be activated and performed within a civic dimention. It required multiple surgical interventions into the human/political body.

I performed this piece in many contexts throughout 2004-05: town meetings, street demonstrations, art museums, theater festivals and conferences. Sometimes I performed it as a solo chant, other times as a call and response community ritual. I asked my audiences: "As I perform it, if you feel that the text addresses your anger and concerns, please stand up." Once I even asked the audience to come on stage and join me when they felt their personal "concerns were implicated in the text." In april of 2005, I made a video version with my collaborator Gustavo Vazquez.