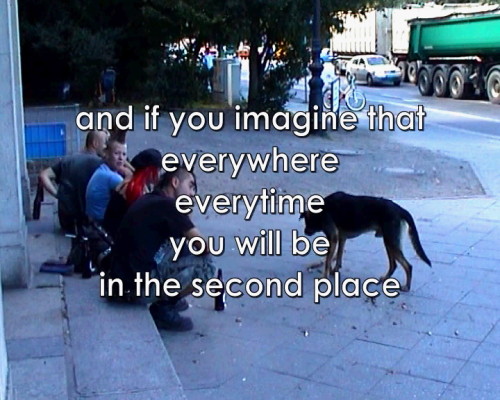 When asked, in an interview conducted in English, what he missed most about being away from home, an Iranian long-term asylum seeker burst into his native Farsi and said that of the sorely missed things, the primary one was language. This triggered the aesthetic of this experimental film.

The film about homelessness and displacement tears apart the different manifestations of language. First, in an extensive credit sequence, all speakers are shown saying exactly what they say in the film. But only their mouths and hands are speaking; no voice can be heard over the street noise that accompanies their visual speaking. When the film proper begins, it becomes clear that the visual remains severed from the voices. During the film we hear the voices and see, in yet a different manifestation of speech, the translated utterances in screen-filling typescript. The images of failed attempts to insure home and security are relagated to the background. Meanwhile, the discrepancy between what we see, read, and hear becomes a statement on language in the contemporary world of displacement.