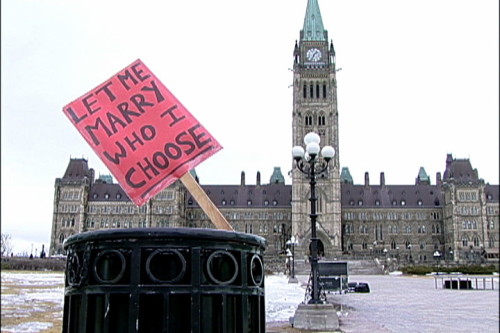 The End of Second Class

The End of Second Class is a powerful documentary that traces the debate on same sex marriage in Canada over the past decade up to the passage of same sex marriage on July 20, 2005. The story is told from the perspective of three couples from B.C., Ontario and Quebec and the lawyers and activists who sought to uphold the Charter Rights of lesbians and gay men against the opposition of the Government of Canada, provincial governments and a coalition of religious right opposition.

The End of Second Class takes us into the court house in Montreal when Michael Hendricts and René LeBoeuf applied for a license to marry in 1998. In a moving moment, the film captures the marriage service at Metropolitan Community Church of Toronto during the reading of the banns and the first legal marriages in world history in January 2001 and goes behind the scenes with interviews with the Reverend Dr. Brent Hawkes and one of the couples, Kevin Bourassa and Joe Varnell. The End of Second Class examines the civil marriage cases in Ontario and B.C. and the role of Egale Canada and the B.C. couples, including litigant couple Jane Hamilton and Joy Masuhara. Act three of the documentary takes us to the Supreme Court and Parliament of Canada to examine the unfolding of the legal and political aspects of the history.

The End of Second Class presents a powerful polemic on an issue of social justice and equality which remains controversial today, and vividly paints the context in which gays and lesbian sought to overcome a history of discrimination and second class status and persuade the most powerful institutions of the state and the courts to affirm their right to equal recognition of their relationships and their right to marry.