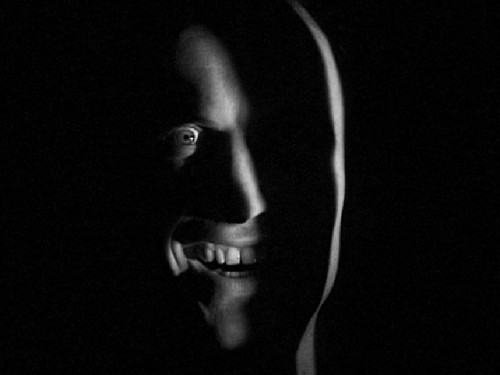 In the filming of SCANNER a short fragment of a scene out of a horror film was repeatedly shown to an actor and his face was filmed as he watched the scene and described what he was seeing on the monitor screen. Initially, the image was quite distorted through technical scrambling and was only gradually made apparent and decipherable to the actor in the several rounds of viewing. With each repeated round as the distortion of the image was decreased, the horror scene conveyed via the actor's description became increasingly vivid. As well, in the repetition of the rounds in addition to the description, the actor was directed to try to mimetically imitate the figures as they became recognizable to him.

The result is a narration in fragments which circles around a dark core. The images appear only fleetingly and variably in the mind of the viewer where they gradually condense into a mysterious scene.