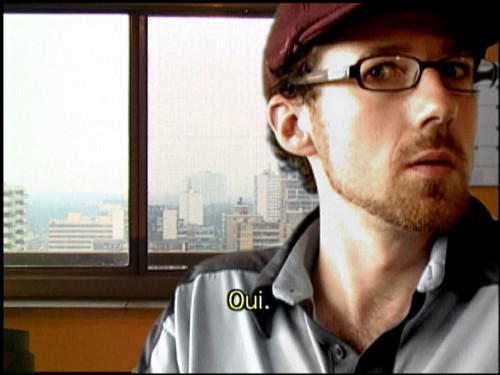 An apocryphal story goes like this:
Of two twin brothers in the womb, one foetus was the stronger and absorbed his weaker brother in utero. The parents never knew that they had briefly had two children; only a single child was born, with an out-of-place artifact (maybe a fingernail in the scalp, or perhaps a tiny tooth embedded in his femur) the only remnant of the sibling he had eaten.

As an Anglophone living in Canada I sometimes feel as if the English language –- my language -- is that stronger brother. I receive a French email and respond in English (my French is not up to scratch), assuming that the sender will be able to default to English – and they do. Phoning someone in Montreal or Tokyo, regardless of what language they speak when answering, I immediately launch into an English conversation. I do this because it almost always works – everyone is willing and to some extent able to accommodate me. I can see my language absorbing all the others, literally as I speak, and I wonder what fragments will be left when it’s done eating, what scraps of all the missing others lodged in my victorious tongue.

My videos are almost always monologue-based and heavily language-oriented. I have shown them internationally – Germany, France, The Netherlands – and not once been asked to provide a subtitled version. This has carried me thus far, but I was not in good conscience able to continue this way in making a video for a Toronto/Montreal video artist residency. My guilt in this situation finally caught up with me; my position as a monolingual citizen of a supposedly bilingual country finally became untenable.

This is not just a matter of political correctness or even, for that matter, politics. Even if English were the only language on Earth I would still have qualms about sticking to it; I would always wonder what patterns of thought my single language confines me to, what possibilities it excludes. My videos thus far have expressed a wariness of language’s traps, but they have done so (as I am now here doing on this page) via an obsessive (English-)language-immersion.

It was time for me and my videos to escape the traps, exit the monolingual room –– and, ultimately, to stop the flow of words and bring on the silence.