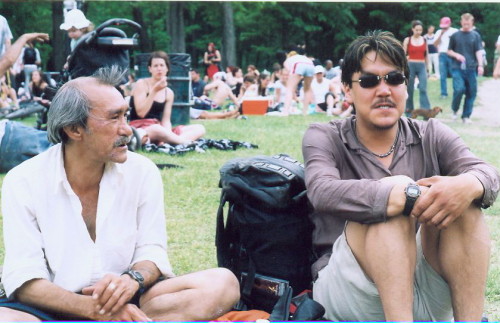 Qallunajatut (Urban Inuk) follows the lives of three Inuit in Montreal over the course of one hot and humid summer. Only two generations ago Inuit lived in small, nomadic hunting camps scattered across the vast Arctic landscape. Since the 1950s, this traditional lifestyle has undergone an astonishing transition from Stone Age to Information Age, as Inuit first relocated (often by force) to government-run settlements, and, more recently, beyond the settlement into southern cities.

We first encounter Jayson Kunuk and his friend Charlie Adams (the renowned Nunavik singer/songwriter), who are both homeless and on the streets of Montreal. In this urban jungle, they meet Pitsulala Lyta, an Inuk Outreach Worker for the Native Friendship Centre. Originally from Iqaluit, Pitsulala came to Montreal at age 17 and lived for many years on the street, but has turned her life around and is now dedicated to helping homeless Inuit get their bearings in the city. Through their stories, the film explores the “urbanization” of the Inuit psyche, as Inuit move further and further away from a direct connection to the land that has sustained their culture for thousands of years.

What happens when an Inuk is dislocated from the traditional Arctic homelands that are so primordial to Inuit culture, history, and social structure? This film shatters stereotypes and gives audiences a vivid, emotional understanding of the challenges facing those who would live Inuit lives in contemporary urban environments. Featuring the original music of Charlie Adams and traditional ajaja songs of Igloolik, Nunavut.