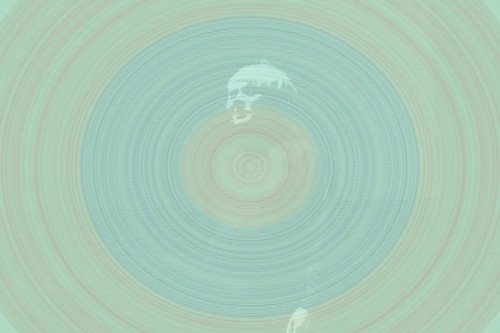 DAMNED AND FORGIVEN is both an adaptation and an abstraction of a performative fragment. The basic layer of this four minute videotape consists of documented performance stock from a live presentation I made at the Cinematheque in Winnipeg in fall 2006, titled Mono Logical Murder City, in tandem with a series of events under the umbrella of Murder City Media City, held during the Independent Media Arts Alliance AGM. The base layer of the videotape DAMNED AND FORGIVEN features myself as a Warholian priest, but with the original colour in the documented performance drained and with the audience presence eliminated. Occasionally the performer is visible through reduced opacity in the montage/collage of still images layered over top of the base layer. Thus the performer and his language, ambiguously damning and forgiving a litany of offenders, functions as a ghost, and ghosts of course can never really die or “go away”. The two layers of images superimposed onto the performative base are composed of both original and unoriginal images - frequently abstract but sometimes concrete and even pornographic. The still images layered on top of the performer’s words are relatively extended in comparison to the linked images on the third and top layer, which are initially roughly one second duration but which eventually progress to a single-frame editing mode. DAMNED AND FORGIVEN references classic “flicker films”, and more than flirts with animation.