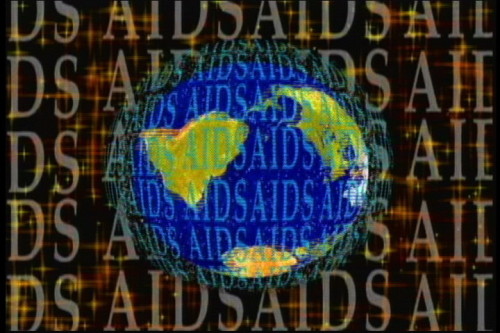 Aids Has Not Left The Building

AIDS HAS NOT LEFT THE BUILDING was originally made in response to a call for submissions for brief projected media-works intended to be shown during Gay Pride Week and on Pride Day. It is a fiftyish-second loop utilizing flashing text and original graphic images, along with two sampled sequences from my 2001 videotape Snowjob.
My response to this call for Pride submissions centres on the relative silence around the subject of AIDS in not only the mainstream media. AIDS tends to be on page fifteen, as a distant international problem. While AIDS has become for many people a manageable illness, there are still serious medical situations involved on top of too many deaths.
There are three versions of this media-work. One is completely silent, and it is intended to be looped and projected. One has music, and is intended to be looped and projected. One has music and credits, and could easily play in both queer festivals and experimental festivals, and not as a loop. AIDS HAS NOT LEFT THE BUILDING is in fact a hybrid Public Service Announcement and flicker film. Many sequences of this tape involve single-frame editing, as well as processing of initial still graphic images. I would like to acknowledge the contribution of the late artist Michael Balser to the sampled image of the spinning globe surrounded by the repeated word AIDS. This new media-work is intended to be viewed publicly throughout the world, and it is indicative of my ongoing interest in mixing the abstract and concrete.