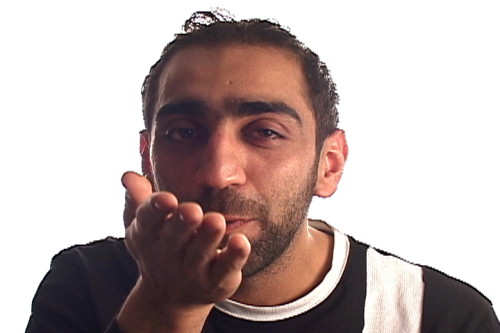 Not a matter of if but when: brief records of a time in which expectations were repeatedly raised and lowered and people grew exhausted from never knowing if the moment was at hand or still to come

There is an installation version of this title which is 32:00 minutes long and requires the collaboration of the artists.

“Peace. I don’t want it. Fairness. Why? Victory? Makes me sick! Love? What a pity. Freedom? Ugly! Friendship? My ass!”

“not a matter of it but when” was developed in 2005–06 in Damascus, Syria. This period of time was marked by momentous events: Rafiq Harriri, the former Prime Minister of Lebanon, was assassinated, the Syrians were pressured to withdraw from Lebanon after a 30-year occupation, the “Cedar Revolution” came and went, elections were held in Iraq and were followed by a descent into civil war, and Hezbollah strengthened its position in Southern Lebanon. These events reverberated in Syria and gave rise to widespread anxiety and anticipation around the potential for imminent change, regime change, internal reform, internal collapse, civil war and the increased power of fundamentalist Islam.

Over a period of several months, we worked with Rami Farah to record short sequences in which he responded to a prompt or a written text. Through a combination of direct address and fantastical narrative, Rami’s improvisations speak to living in a condition of uncertainty, chaos and stasis.