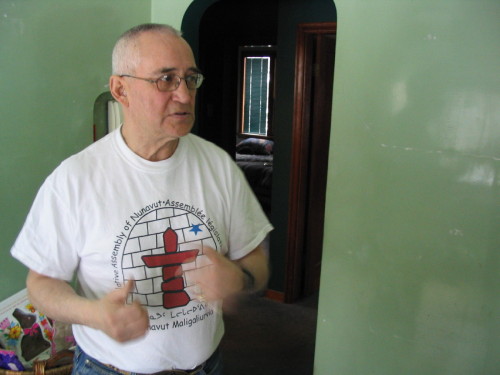 Zacharias Kunuk, the award-winning director of Atanarjuat The Fast Runner (Camera d'or, Cannes 2001), travels to Edmonton to meet Kiviaq, Canada's first Inuit lawyer, who was also a former Golden Gloves boxing champion, a City Alderman, and the only Inuk ever to play on the Edmonton Eskimos CFL football team.

Kiviaq's extraordinary life story bears testimony to the treatment indigenous people of the Canadian Arctic have endured for generations due to the government's inhumane colonial policies. Now dying of cancer, the life-long fighter is embroiled in the last and most important fight of his life, as he sues the Canadian government to secure for Inuit people something they deserve and have never had - the same official status as all the other aboriginal peoples of Canada. As his friendship with Kiviaq develops, director Zacharias Kunuk learns new ways to take a stand for his own rights as an Inuk.

An important political documentary about indigenous human rights, Kiviaq versus Canada focuses on Canada’s colonialist policies in the Arctic over the last 100 years, Canadian law, and the current status of Inuit in Canadian society.