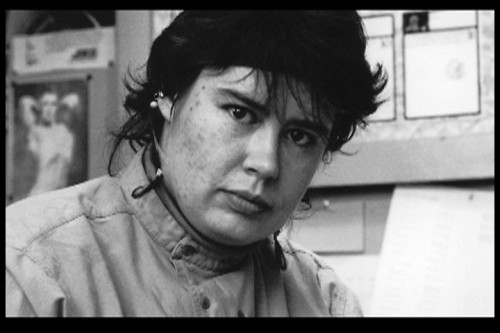 This video is a commemoration to Chris Beachell (August 16, 1953 – February 18, 2007), celebrating her life and contribution to the lesbian and gay liberation movement in Canada.

Chris Bearchell is a towering figure in the history of gay liberation in Canada. A courageous and compassionate woman, Chris began writing for the Body Politic (TBP) in 1975, and was in the leadership of some of the first lesbian and gay organizations in Canada, including LOOT, the lesbian organization of Toronto, CGRO, the Coalition for Gay Rights in Ontario (later renamed CLGRO, the Coalition for Lesbian and Gay Rights in Ontario), GATE, the Gay Alliance Towards Equality and the Committee to Defend John Damien (a pioneering test case against discrimination on the grounds of sexual orientation). In 1981, following the massive police raids on gay bathhouses in Toronto, Chris inspired 3,000 angry demonstrators with her words “No more shit!” and became involved in the Right to Privacy Campaign. In 1981 and 1986 she worked on the campaign to win an amendment to the Ontario Human Rights Code to include non-discrimination on the basis of sexual orientation, traveling across the province to build that campaign which resulted in the inclusion of sexual orientation in the Ontario Human Rights code – making Ontario the 2nd province in Canada (after Quebec) to pass such legislation. This memorial tribute provides a look into a time when gays and lesbians faced widespread and deeply entrenched homophobia and discrimination in Canada and a tribute Chris Bearchell’s courage and contribution to liberation and equality during those difficult years. Those of us who today live with greater openness and freedom in our lives owe much to this brave soul.

Chris died at Vancouver General Hospital, after a lengthy and courageous battle against cancer.

“They think that when they pick on us that they’re picking on the weakest. Well, they made a mistake this time! We’re going to show them just how strong we are. They can’t get away with this shit anymore! No more shit!
- Chris Bearchell (speaking at the demonstration protesting the bath raids, midnight, Feb. 6, 1981, Toronto)