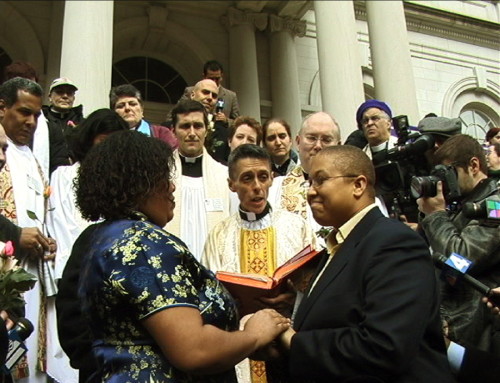 One Summer in New Paltz: A Cautionary Tale

“Fairy tales take us into a world where taboos may still be in force but where transgression is the motor of the plot.” - Tatar, Maria. Grimms' Fairy Tales. New Jersey: Princeton University Press, 1987.

Set against a backdrop of the Bush administration’s policy of endless war and assault on civil liberties, One Summer in New Paltz is a cautionary tale of a young mayor of a small village who decided to do the unthinkable.

In February 2004, President George W. Bush called for an amendment to the Constitution of the United States to enshrine a heterosexual definition of marriage. His announcement ignited a wave of civil disobedience same-sex marriages across the United States. Within days of the President’s announcement, Jason West, the 26 year old mayor of the village of New Paltz, New York, decided to use his power as mayor to marry same-sex couples. As news of the mayor’s decision spread, hundreds of gay and lesbian couples converged on the village of New Paltz asking to be put on the list to be married. On February 27, West performed 25 same-sex marriages on the steps of the New Paltz village hall. A few days later, he was arrested and charged with 24 counts of solemnizing a marriage without a license (each count carries a sentence of one year). Facing a possible 24 years in jail and thousands of dollars in fines for performing the marriages, as well as threats of removal from office by the New York State governor, West was forced to stop performing the marriages. But, the political momentum was such that the marriages continued to be performed, first by two local ministers, and later by dozens of clergy from various faiths who converged on the village of New Paltz from across the state. The New Paltz Equality Initiative, composed of townspeople and students from the local campus, sprang up overnight to continue the marriages and support the mayor’s legal battle, dubbing the movement in New Paltz “The Summer of Love”.

One Summer in New Paltz provides an insightful look into the civil disobedience same-sex marriage movement in the United States in a time of war and attacks on rights and freedoms.