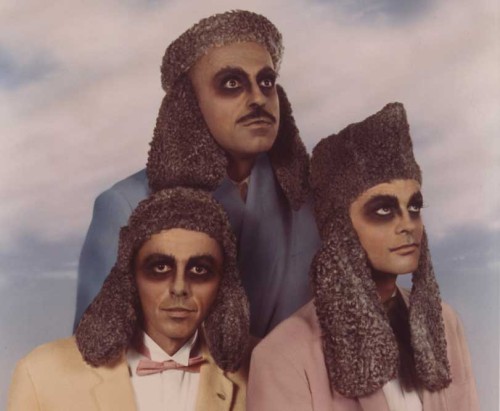 They are gay and irreverent, and they launch “The Miss General Idea Pageant” to investigate the nature of glamour and celebrity. Fully utilizing their ironic camp sensibility, the trio present themselves as “Art Stars.” They publish an art magazine called FILE, for which they gain -notoriety and prompt a lawsuit from LIFE magazine for “simulation of LIFE.” It isn’t until three years later that Andy Warhol publishes the like-minded INTERVIEW.

GENERAL IDEA achieves celebrity status in Europe in the 1970s. Treated like rock stars, they exhibit in major museums in Amsterdam, Berlin and Paris and are invited to make video-art for Dutch television.

The 1980s bring the first labeled cases of AIDS. GENERAL IDEA responds by making art that addresses the plague virus. In an unforgettable coup, it appropriates the well-known “LOVE” painting by Robert Indiana and replaces those four letters with AIDS, for the now world-famous logo. GENERAL IDEA continues to tour Europe and North America with massive political installation pieces that chronicle the devastating spread of the disease and its impact on their community, including an early end to the lives of two members of GENERAL IDEA.

AA Bronson, the sole survivor of GENERAL IDEA, narrates this documentary lending personal relevancy to a poignant story of art and sexual politics. GENERAL IDEA: Art, AIDS and the fin de siècle is a tale of love, fame, overwhelming loss and, ultimately, of renewal.