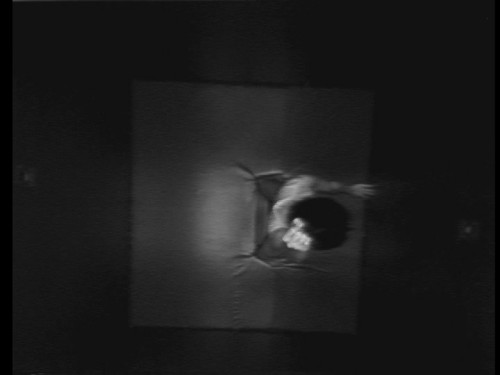 To mark the 30th anniversary of in ten sity (1978-2008), Paul Wong has digitally remastered this video art punk classic. in ten sity, says Wong, “is an endurance piece, a statement of emotional and physical intensity, a visual and vocal expression of a vein of thought and strain of energy.” Dedicated to Kenneth Fletcher, 1954-78.
"For the audience who viewed Wong’s performance at the Vancouver Art Gallery the disturbance created by Wong’s bodily expression was both compelling and emotionally moving. The VAG exhibition space was staged with a four walled cube, 8’ X 8’ which was padded internally. The four walls and the open ceiling were monitored by video cameras. Wong entered the gallery, climbed a ladder and disappeared into the blue cube. As the images appeared on the bank of video screens thumping noises could be heard from within the box structure. A tape of Wong’s voice informed the audience that in ten sity was dedicated to the memory of his friend and collaborator Ken Fletcher. As the five monitored images appeared the viewers were shown distorted wide-angled perspectives of Wong as he paced and confronted his space within the cube."
- Arthur Perry, Vanguard Magazine, 1979.
For 25 minutes he bounced off the walls to the lyrics of The Avengers, Patti Smith and The Sex Pistols. According to a newspaper account the performance culminated in an unscheduled near riot on the part of the audience who threw objects, and then themselves, into the space in an attempt to both reinforce and interrupt Wong’s statement of emotional and physical intensity.