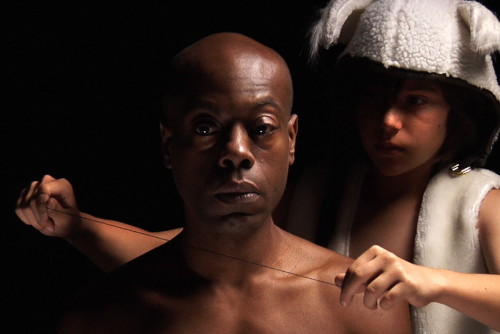 In 1999, South African AIDS activist Zackie Achmat went on a treatment strike, refusing to take his pills until they were widely available to all South Africans. This symbolic act became a cause celebre, helping build his group Treatment Action Campaign into a national movement -- yet with each passing month, Zackie grew sicker...

FIG TREES is a documentary opera about AIDS activists Tim McCaskell in Toronto and Zackie Achmat in Capetown, as narrated by an albino squirrel, an amputee busker and St. Teresa of Avila. Telling the story of Zackie's treatment strike in song, and the larger story of the fight for pills on two continents, and across two decades, FIG TREES performs musical and political inversion on the music and words of Gertrude Stein's 1934 avant-garde classic Four Saints in Three Acts. Using compositional techniques of chance, inversion, and polyphany, FIG TREES finds points of political harmony and musical convergence in operatic and documentary sequences that profile the overlapping stories of various activists: Tim McCaskell, Gugu Dlamini, Stephen Lewis, Simon Nkoli... and Zackie himself.