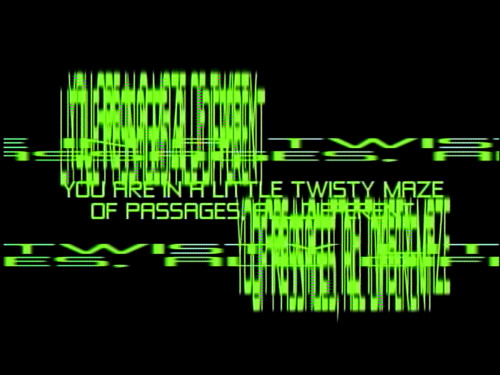 You Are In A Maze Of Twisty Little Passages, All Different: Films and Videos by Daniel Cockburn

Daniel Cockburn plays at the intersection of avant-garde and narrative cinema. Bringing together innovative storytelling strategies with structuralist experimentation, he breaks open day-to-day reality to reveal the strange codes beneath. Self-reflexive to the point of neurosis, Cockburn is fascinated with how moving images can illuminate the structures and rhythms of our lives; he is forever looking for hidden meaning in randomness and patterns in chaos.

Curator/Tour Coordinator: Jon Davies, Pleasure Dome with the support of the Canada Council for the Arts. The tour includes the publication of a catalogue including essays by video artists Steve Reinke and Emily Vey Duke, author Sheila Heti, filmmaker Spencer Parsons, and theoretical physicist Lee Smolin.

Subtitling/translation of films and videos is a possibility; please inquire. Please note that the tour will also launch new video work made in 2009.

Program:
AUDIT (version 1), 2003, 3 minutes, super 8 w/ audio CD:
An animated attempt to graph the shape of a life and all the coincidences and repetitions which occur in it.

Rocket Man, 2001, 5 minutes, video:
A karaoke video taking the lyrics and sentiment of the Elton John / Bernie Taupin pop classic at face value… and then puts a different face on them.

Metronome, 2002, 11 minutes, video:
A multimeter cinemajunkie journeys to the depths of his cranium (and beyond!) in search of the greatest lowest common denominator of them all.

WEAKEND, 2003, 7 minutes, video:
A videotape whose sole audio/video source is The 6th Day, a Hollywood feature film about cloning.

The Impostor (hello goodbye), 2003, 9 minutes, video:
A circular lament in memory of a eulogy.

Nocturnal Doubling, 2004, 4 minutes, video:
If the universe doubled in size, would anybody know? One person does. This is his story.

Figure Vs. Ground (with Emily Vey Duke), 2004, 7 minutes, video:
A roving search across endless colour-fields gradually reveals a solitary singer, struggling to be heard over distortion and doppelgangers.

Stupid Coalescing Becomers., 2003, 3 minutes, video:
A narrator lashes out at the "little opposite rebellions" he sees everywhere, secret pieces of the univers¬e that obstinately refuse to follow time's forward flow.

This Thing Is Bigger Than the Both of Us: These Are Facts, 2007, 1 minute, video:
My friend has an idea for a movie about secrets - but he won't tell me what it is. The movie about his secrecy becomes my attempt to guess what his movie idea is.