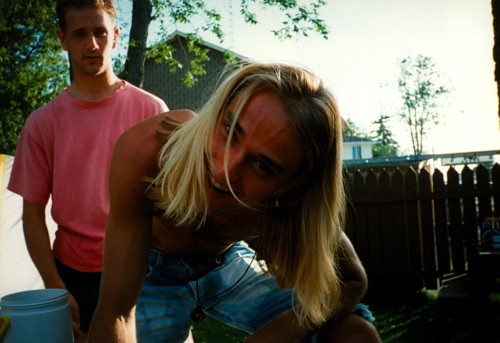 “Part tribute, part personal investigation, Mark sees Hoolboom piece together a mosaic of delicate fragments, crafting the life of his longtime friend from unconventional interviews, stock footage, home video and childhood relics, probing at the mystery of just how little we know about the lives that surround ours.” Melbourne International Festival

“Touching portrait of a lost friend. This moving film tells the story of Hoolboom’s friend and collaborator Mark Karbusicky. Interviews with Mark’s friends and family, as well as his lover, are interwoven with home movies, offering a glimpse into the life of this generous, loving and enigmatic figure. A powerful testimony to the enduring impact of our actions on the lives of others.” Edinburgh Festival

“A thousand words, a thousand images, rise to counter a loved one’s absence – a friend’s death is accompanied by a thousand silences, a thousand prostrations. Mike Hoolboom weaves his narrative out of a profusion of images gleaned, gathered and requested as well as footage of his own. To these he adds a remarkably textured soundtrack, including his own voice. Mark, who had assisted the filmmaker with his editing during six years, whose trade had been the care of the handicapped, whose vocation had been helping those close to him, was found hanged. He wasn’t even forty. His girlfriend’s account of the last rasping, haunting breaths escaping his dead body has the effect of an exorcism. The images are delicate icions, which, when assembled, form a necessarily fragmentary, incomplete portrait of Mark. Mike Hoolboom is confronted by the fundamental powerlessness of cinema to give life to a human being, other than in the transient shadow plays that are his films. His editing is exquisite, with images both contiguous and superimposed. It is within these elaborately crafted spaces that the filmmaker searches for the living memory of death. It is no coincidence that the film opens with underwater images of a child’s legs. The liquid elements has a metaphorical value: one must delve below the surface of the water, below that of images, to really see man walking. Towards the end of the film, it is by slowing down the footage of children running, in the unexpected thickness revealed by the slow-motion, that the filmmaker seeks to tease their share of painful and innocent memory out of the images. But as closely as one might inspect these images, with their peaks and gaps, these scenes from everyday life, what they ultimately reveal is the mystery of death. Mark functions like a secular requiem. Mike Hoolboom meditatively offers up this film which he knows to be peopled by touching ghosts – though they may still be alive, they are constantly in the process of disappearing.” Jean Perret, Visions du Reel, Nyon

“Mark is an elegiac portrait of his friend and collaborator, Mark Karbusicky, who died in 2007. Mark weaves together childhood snapshots, found footage, and interviews with Karbusicky’s friends, family, and longtime partner, transsexual performance artist Mirha-Soleil Ross, to map the contours of a life lived “in the background” and trace the mark he left on the communities around him. Curator Mark Webber notes, “few filmmakers use re-appropriated footage in such an emotive way… Hoolboom’s recent work is in profound sympathy with the human condition that speaks directly to our hearts.” Amy Beste, Conversations on the Edge, Chicago

“Mark died at age 35, and Hoolboom went looking for answers, talking to friends, probing Mark’s life of service to others and to animal rights, collecting images and stories. What he finds are only faint traces of Mark’s time on earth, in the streets and sad apartments, in a child he meets by chance. What he makes is a deeply moving reflection on relationship and the mysteries of absence and presence. A film that breathes with an urgent necessity all its own. Hoolboom’s finest work to date.” Bruno Dequen, Festival de Nouveau Cinema, Montreal