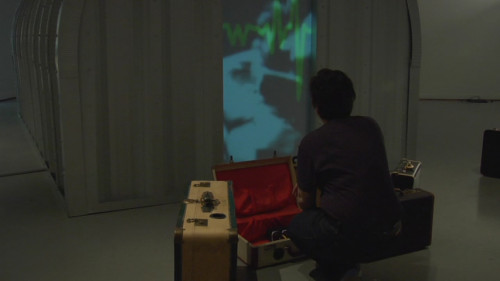 Inspired by the experiences of two Jewish women who worked for British military intelligence during World War II, Thin Air is a new multi-media exhibition by Toronto artist Nina Levitt. The installation is the result of the artist’s investigation of the women’s presence in historical documents and popular culture, and is comprised of sculpture, interactive sound and video, and photography.

Hungarian-born Hannah Senesh was recruited and trained in Palestine for a secret mission into occupied Europe. She was arrested as soon as she entered Hungary and tortured for several months before being found guilty of treason. She was executed at the age of 23 on November 7, 1944. Her diaries and poems survived and have become part of Israeli popular culture. Vera Atkins (née Rosenberg 1908–2000) was born in Romania, and emigrated to England where she never revealed her Jewish parentage. She was the highest-ranking female officer in British intelligence and was responsible for all the agents sent into Occupied France.

From intelligence headquarters in London to a secret mission in Eastern Europe, these two women operated in entirely different capacities during the war: their experiences have been brought together in this exhibition. Thin Air evokes the emotional atmosphere of the site of departure and the site of arrival by parachute, and captures the uncertainty and tension that accompanied these actions by involving the viewer’s presence. Unveiling the complex narratives that envelop these women’s stories and their portrayal in popular culture, the artist underscores the inadequate representations of women in history and visual culture. Ultimately, Thin Air illuminates the intricate structures that mediate our perception of information and influence the acts of looking, reading, and listening.

Installation: Entering the darkened gallery, viewers encounter a metal Quonset hut: flickering light emanates from its seams. Small holes where bolts are missing, cast twinkling light onto the walls and ceiling. Peering through these holes into the hut, a black and white video showing a female agent’s training and deployment by parachute can be glimpsed on the walls inside the hut. On the front of the structure, the door acts as a rear-projection surface for the video.

Scattered near the entrance to the hut are eight vintage suitcases. Each suitcase contains a unique audio clip that can be activated when the case is picked up: Vera Atkin’s voice recounting key moments of her wartime intelligence work can be heard through a small speaker. These short sound loops are excerpts of an interview with her, conducted in 1995. Opening a suitcase causes a waveform video of that voice recording to emerge from the black & white video. If all eight suitcases are open, the screen is filled with eight overlapping waveforms. Closing the suitcase causes the wave video to disappear.

In an adjoining room, loud fans can be heard as a 24-foot wide white parachute inflates. After three minutes, it is fully inflated and the fans shut off. The parachute silently and slowly deflates. The two large fans are triggered by motion sensor to turn back on after the chute has completely deflated.

The parachute is flanked by a 29-foot long sequence of colour photographs of all the contents of Hannah Senesh’s military service record, and a large projection of Telegrams of Departure, a video animation based on two of her diary entries from 1943.

A catalogue jointly published by the Koffler Gallery and the Robert McLaughlin Gallery, will feature essays by scholar Shelley Hornstein and curator Linda Jansma (November 2008).