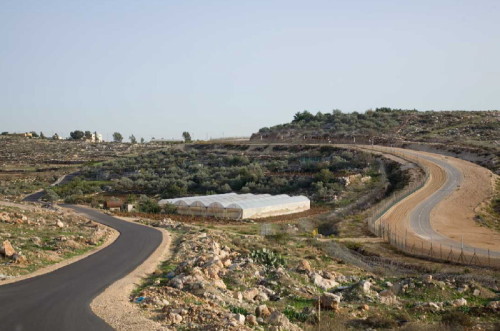 Road movies have their roots in spoken and written tales of epic journeys, such as the Odyssey and the Aeneid. Like their antecedents, the films presented here tend towards an episodic structure in which each one reveals a piece of the plot—the master plan for Palestine—a road system partitioning the West Bank into three distinct enclaves with controlled passage between them. Road Movie is a series of short films available to screen in its entirety or as individual titles, and is a preview of a twelve-screen installation that was specifically designed for the Toronto Palestine Film Festival. Each film takes us on a small journey on the segregated roads that have become known as the Apartheid Roads in contemporary Palestine.
Continuing our work on landscape and its relationship to shifting political geographies, each film follows a journey on either Palestinian or ‘Jewish only’ roads all shot in stop-motion animation in single takes. Journeys that took several hours have been reduced to only minutes creating a density endemic to the political atmosphere. The films take on a timeless feel as people and places appear and disappear capturing ghostlike figures in the frames. The intense methodology mimics the systemic implementation of Occupation grafted onto the landscape and like surveyors we move along the roads frame by frame.
Opel Cadet, 3:13
Raja Shehadeh, lawyer for Palestinian rights and eloquent writer with a keen eye for master plans, became aware of Israel’s road plan for the ‘Occupied Territories’ and its consequences long before the manifestation of today’s “Apartheid Roads”. For over thirty years he witnessed Israeli road building eating the Palestinian landscape and battled in court as they expropriated more and more land to do so. Originally from Jaffa, the road that took Raja and his family to and from the sea is a memory: It is designated for Jewish travelers only.
Slow Emergency, 3:31
Yehia is an ambulance driver working in the town of Silwad, about 15 minutes from Ramallah. As a result of the Apartheid roads however, Yehia’s drive to the Ramallah hospital now takes forty minutes on winding, sometimes-treacherous roads. Slow Emergency takes us down those roads in his ambulance as we transport a dialysis patient.
The New-Old Road to Jericho, 2:48
The oldest inhabited city on earth, decry many of the tour books yet most of the tourists are gone. Jericho, once a bustling Palestinian town of winter homes for Ramallans has been isolated from the rest of the West Bank. After a day in Jericho’s fruit markets with Huda, a no-nonsense 70-year old, we journey back on the new old road through Christian Taybeh back to Ramallah.
o caminho, 3:16
Mato Grosso, Brazil is a long way from Ramallah, Palestine—Ayman has lived in both. He recently returned to Ramallah. But often he wonders if he made the right decision as negotiations stall, the Palestinian leadership disappoints and his taxi usually only covers a few square miles. On this day he takes us to Bethlehem and back—once a 20-minute drive passing through Jerusalem. But Palestinians are now barred from Jerusalem and miles around. With the detours, the journey is now an hour and a half.
Al Almanie (the German), 3:11
They say Arabic is difficult to master, but for Kleemans, a German geologist, every idiom is as familiar as the rocks he studies and the water-wells that have become his obsession. He is the consummate expert. On a ride from Ramallah to Qalkilya, Kleemans expounds on the disastrous situation of water resources in Palestine. Rapidly dwindling due to the expansion of settlements, Palestinians must now buy back what is left of their own water from Israel. At our last checkpoint we are denied entry to Qalkilya.
To Biddo, 3:18
A pleasure trip with a young Arabic teacher in the Palestinian countryside ends in despair as the cemented structures of Occupation etch themselves into her mind in ways that until now were less apparent.
Like Almond Blossoms, 3:20 In the 70’s Sonia was a hippy teenager leaving Jenin for the big city of Ramallah on her way to university. At 19 she is jailed for three years for belonging to a student movement. We journey back to Jenin to visit Sonia’s mother along the road she knows so well. But much has changed and the roads at once familiar also confuse her.
Ezra, 3:05 Hebron can seem like a million light-years away from Ramallah, especially with all the detours Palestinians must now take. Ezra, a Jewish Israeli who hails from Iraq, refuses to stand idly by as the Occupation wreaks havoc on every aspect of the land and its people. A modern hero who has been compared to Martin Luther King Jr, Ezra risks jail and more as he lives in Israel they only way he can: fighting for Palestine.