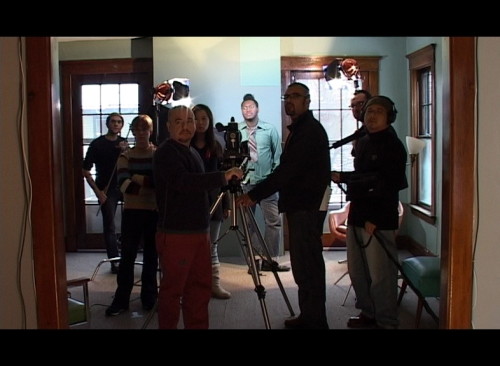 At the centre of this film labyrinth is a tarot reading in which the invented cards seem to determine or reflect unfolding events on screen. There is a filmmaker trying to write a film, but the house in which he writes is cohabited by the film’s crew, cast and the characters they are playing. Everyone is banging around on and off camera, trying to get into the bathroom, or waiting for the film and its story to happen. This is not a story however, but rather a sequential turning of nonsensical cards: the tampon in the toilet bowl, a light repositioned causing shadow, a man on the floor who cannot separate himself from the house (which may or may not be on fire). This film is Like a House on Fire, a cinematic game of Clue in which the lead piping murdered the ballroom using a Colonel Mustard. Every detail is meaningless sign, in shuffle. A film can go anywhere it wants…